The live streaming of the match will be available on hotstar.com and the match can be viewed on Star Sports HD 2 and Star Sports 2.

Before the Test series, England entered as favourites while West Indies were belittled. But at Lord’s, the battle gets better. After leveling the series at Headingley, West Indies march into the third and final Test in search of glory while England hope to regain the favourites tag once again. West Indies riding on Shai Hope and Kraigg Brathwaite’s success, hope to replicate the same in the final Test. The live streaming of the match will be available on hotstar.com and the match can be viewed on Star Sports Select HD 2 and Star Sports Select 2. In England, the match can be viewed on Sky Sports 2 HD and Sky Sports 2.

Shai Hope became the first batsman in history to score hundreds in both innings of a match at Headingley, putting his side in a strong position with 147 before following up his maiden Test century with a match-clinching 118 not out in the second innings. As for the changes, the home side have recalled Toby Roland-Jones on his Middlesex home ground and dropped Chris Woakes in the only change to their side. Having gone wicketless on the last day in Leeds, Anderson arrives at Lord’s still three away from becoming the first England bowler to take 500 Test wickets.

The Caribbean side last triumphed in England in 1988 when a team boasting a clutch of all-time greats including Gordon Greenidge, Viv Richards, Malcolm Marshall and Curtly Ambrose romped to a 4-0 win. 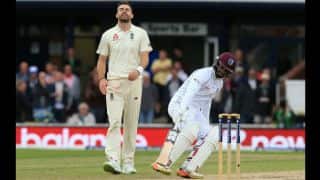