Former captain Nasser Hussain has shrugged off England‘s heaviest ODI defeat on Tuesday against Sri Lanka as just a bad day in the office saying this won’t have long effect, especially on their plans for the World Cup next year.

After being hammered by Sri Lanka batsman in the fifth and final ODI in Colombo on Tuesday, England were reduced to 132/9 in chase of 367 when rain stopped play. England were 219 runs behind the DLS par score and thus suffered their biggest ODI defeat (in terms of run-margin). They were sloppy in the field and looked a far cry from the team that had dominated Sri Lanka in a series winning display.

“England were awful, make no mistake,” Hussain told Sky Sports. “They didn’t play very well and it was just one of those days. They’ll say ‘let’s put it all to bed in one game’ and move on. I don’t think this will have any bearing on a World Cup in May, June and July in England next year. It was just a very bad day at the office.”

England captain Eoin Morgan rested himself from the dead rubber after England had already claimed the series in Kandy. Hussain feels the current England should be proud of the current ODI side and their woeful show in the final match was down to a combination of several factors.

“Previous England one-day sides have been complicated sides, full of theory and overthinking. This is not one of those sides, they will just shrug it off and make no excuses. We have got an England one-day side we can be very proud of. It was just a game too many for a side pushed too hard by playing out here at this time of year,” he said.

He further added, “[All the changes] gave a tour already on a knife-edge, because of the scheduling and the weather and the cabin-fever the players would have been feeling, an end-of-term feel. It was almost ‘the tour’s done, the series is won, we are having a look at people’.”

England return to action with a one-off T20I against Sri Lanka on Saturday. 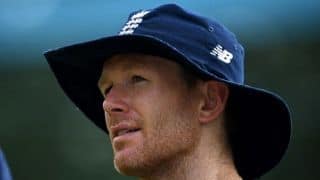