Rain had the final say as the third and final Test between England and the West Indies ended in a draw at Edgbaston on Monday. 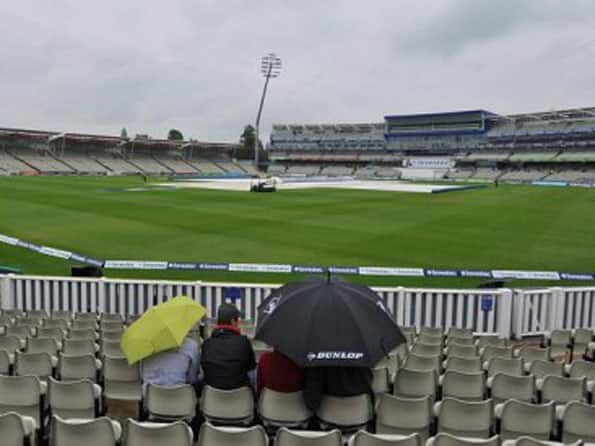 Rain had the final say as the third and final Test between England and the West Indies ended in a draw at Edgbaston on Monday.

In a match where three days out of a possible five were washed out, it was no surprise neither side had got in a position to force victory.

And, after yet more rain, the umpires finally called the game off shortly before 3.15pm local time (1415GMT) following no play at all on the final day.

The draw gave England, who’d already retained the Wisden Trophy, a 2-0 win in this three-match series after five-wicket and nine-wicket wins at Lord’s and Trent Bridge respectively.

Overnight, England were 221 for five in reply to West Indies’ first innings 426, a deficit of 205 runs and needing a further 56 to avoid the follow-on.

Ian Bell, attempting to become the first Warwickshire batsman to score a Test hundred on his Edgbaston home ground, was left on 76 not out and nightwatchman Steven Finn nought not out.

West Indies’ total owed much to Tino Best’s whirlwind 95, the highest score ever by a Test match No 11 batsman.

Best faced just 112 balls with a six and 14 fours on Sunday’s fourth day.

Together with wicket-keeper Denesh Ramdin, who made 107 not out, Best shared a partnership of 143 — the third highest 10th wicket stand in Test history and a West Indies record.

In their places came fellow seamers Graham Onions and Finn.

Durham quick Onions, who two years ago suffered a career-threatening back injury, took four wickets for 88 runs in 29.3 overs, with Finn managing three for 109 in 32.

After this match, England and the West Indies play three one-day internationals and a stand alone Twenty20, starting with Saturday’s 50-over clash at Southampton.

The West Indies will warm-up for the limited overs fixtures with a one-day game against Middlesex at Lord’s on Wednesday. (AFP)