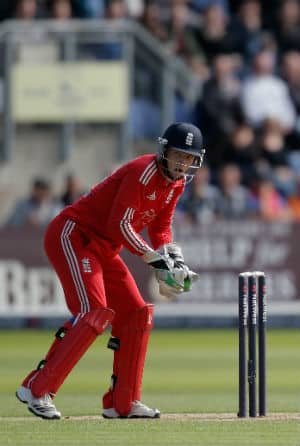 Despite being a regular fixture in the ODI team, Jos Buttler was not selected in England’s squad for the 2013-14 Ashes series in Australia © Getty Images

The 23-year-old Buttler, who has played 19 ODIs but has yet to make his Test debut, joins from his native Somerset.

His bid for more time behind the stumps at county level at Somerset was blocked by fellow England international Craig Kieswetter and Buttler was not selected in England’s squad for the 2013-14 Ashes tour of Australia, with Yorkshire’s Jonny Bairstow the back-up gloveman to Matt Prior.

However, Buttler is expected to be the first-choice keeper at Lancashire, who will play in the First Division of the County Championship next season after winning the Second Division title, after the Manchester-based club released Gareth Cross.

“I am delighted to be joining Lancashire County Cricket Club. They have a strong squad and are very ambitious to build on this season’s achievement,” Buttler said in a Lancashire statement.

“The club has an exceptional coaching staff which will help me to continue to develop as a keeper-batsman.

“Lancashire have a talented group of players who will be looking to challenge for all three competitions. They have been there or thereabouts in recent seasons in the T20 competition and I know for certain that Lancashire Lightning will want to make a mark in the NatWest T20 next year.”

Lancashire cricket director Mike Watkinson, himself a former England international, said: “We are delighted to bring Jos to Emirates Old Trafford. He is a regular England international and has demonstrated that he is growing as a cricketer. His talent and ability match our ambitions going forward.”