England captain Alastair Cook insists there is no chance his team will underestimate New Zealand in the Test series which starts at Lord's on Thursday. England captain Alastair Cook insists there is no chance his team will underestimate New Zealand in the Test series which starts at Lord’s on Thursday.

Cook’s side were accused of complacency when they were forced to settle for three drawn Tests on their recent tour to New Zealand despite arriving as heavy favourites.

But Cook is adamant England gave their Kiwis their full respect and he believes they will have to be at their very best to beat Brendon McCullum‘s men in the two-Test series.

“I don’t think we were complacent at all,” Cook said at a pre-match press conference on Wednesday.

“I don’t think there was complacency around, but we didn’t play as well as we could have done: that’s the bottom line.

“We all know cricket is not played on paper or on rankings. It’s out there in the middle, 11 v 11. It doesn’t matter what’s gone on before or after. It’s those five days.

“I think every Test series you play for England is a hugely important series, it doesn’t matter what has gone before.

“We are fully focused on these two weeks of Test cricket versus New Zealand. We have to be at our best to win.”

Cook is hopeful the return of off-spinner Graeme Swann and seamer Tim Bresnan from elbow surgery will give his team’s bowling attack a cutting edge they lacked in New Zealand.

“It’s great to have Graeme fully fit after his elbow surgery; you want your best players available,” he said.
“I think you miss every experienced player who doesn’t play. You can’t buy experience.

“It’s very crucial you have that. You always miss players of that kind of calibre when they’re not around.
“It’s obviously great to have Bressie back. His elbow surgery has gone well.

“With the amount of cricket we have coming up in the next 12 months we’re going to need more than 11 players and it’s great he’s back.” 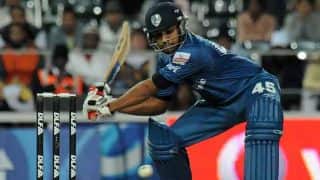