India Women failed to score big in the second ODI against England Women as they were all out for mere 113 in 50 overs opting to bat first.

India Women failed to score big in the second ODI against England Women as they were all out for mere 113 under 40 overs opting to bat first. The England Women chased the total down easily beating India by eight wickets under 30 overs and leveling the 3 match ODI series.

Danielle Wyatt missed her half century by three runs but gave a good start to the innings with Tammy Beaumont (39*). They both stitched a partnership of 73 for the opening wicket. Ekta Bisht dismissed Danielle in the 15th over and followed it by the wicket of Amy Jones in her next over. England were soon two down for 75. However, it was too late by then with only 113 on board. England won the match comfortably in the 29th over with Heather Knight hitting the winnings runs.

Earlier in the match, Danielle Hazell and Sophie Ecclestone went through the Indian batting line up sharing four wickets each. Smriti Mandhana, the inform player for India was the top-scorer again with 42 runs. Deepti Sharma too played well and was unbeaten on 26. However, only three Indian batters managed to reach the double digit score with three of the players getting out for a duck.

The series decider is scheduled to be played on April 12 at Vidarbha Cricket Association Stadium, Jamtha, Nagpur.

Player of the Match: Sophie Ecclestone 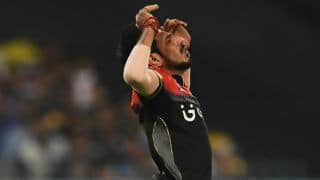