Playing at R Premadasa Stadium, Colombo, England Women put up a challenging total of 240 for 9 at the end of their 50 overs against Sri Lanka Women.

England Women ended their series with a clinical performance as they handed their opponents a 4-0 defeat. Playing at R Premadasa Stadium, Colombo, England put up a challenging total of 240 for 9 at the end of their 50 overs. The hosts could not emulate the performance as bowlers Laura Marsh, Danielle Hazal and Natalie Schiver ran through the Sri Lanka batting line-up, bundling them out for a paltry 78, with 16.5 overs still remaining. READ: India vs West Indies, 1st Women’s T20I Match Report: Stafanie Taylor’s 90 wins visitors opening fixture

Talking about the victory, Head Coach Mark Robinson told ecb.co.uk, It s been an incredible year, and there has been huge change during this time. We put out a team in the third ODI against Sri Lanka on Tuesday that was completely different to the one that took on South Africa at the start of the year. As a group, we ve come a long way, a lot has happened, and of course there have been a few bumps along the way, but overall we really feel that we are moving in the right direction, which is the most important thing. Since the beginning the players have given it everything, which has been fantastic, I couldn t have asked them for any more. Looking at where the team was after that ICC World Twenty20 in March to where they are now in terms of their physical condition, there s no comparison, and that s testament to how much hard work they have all put in.

The emergence of Heather Knight as the new leader of the team has been exciting to watch. With every match and every series she is getting better and better. As a captain and a player she gives it absolutely everything, and I am proud of everything she has done in such a short space of time. I said from the start that we would only really know where we are as a team after a year, and I m confident that we are on the right track. We want to be more resilient, more professional, and the clinical nature of our performance in the third ODI of this series against Sri Lanka showed how far we have come in that respect.

The objective for next year is of course to win the ICC Women s World Cup, it s why we play the game, and we shouldn t be embarrassed to say that. Whether we are quite ready to do so as a young group, is a different matter, but our first dream is to win it and we will do everything we can to live that dream,” he said about the coming year. 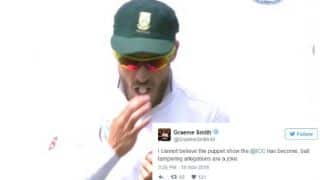