England have never won the biggest cricketing tournament, with their best performances being a runner-up finish during the 1979, 1987 and the 1992 editions.

Fast bowler James Anderson believes England are favourites to win the 2019 World Cup, and that it would require them to “screw up” for the outcome of some other reason. England have never won the biggest cricketing tournament, with their best performances being a runner-up finish during the 1979, 1987 and the 1992 editions.

During the last World Cup in 2015, England were knocked out by Bangladesh in the group stage but since have regrouped phenomenally to now be termed one of the leading candidates for the World Cup title scheduled to take place in England and Wales starting May 30. Under Eoin Morgan, the team has witnesses tremendous amount of success having registered series wins against India and Sri Lanka.

Anderson, England s leading wicket-taker in Tests feels on England s current form, only India is the closest, and that familiarity with conditions at home gives them a great chance to create history.

“There s no-one really anywhere near (England) in the one-day form, probably India is the closest,” Anderson told Tailenders podcast. “I think in our conditions I don t think anyone is going to come near us, so I think we ve really got to screw up if we don t win the World Cup.”

England are one of the better balance sides in the world with all three departments looking extremely formidable in the presence of phenomenal athletes. In fact, the competition within the team is so healthy that Morgan once stated how he is willing to even drop himself from the Playing XI if it makes for a better team composition. It is the same confidence in his players which makes even Anderson believe that England don t have much reasons to worry about.

“I don t want to put too much pressure on the lads, but the way that England play, the talent we’ve got, the players we’ve got and the way we play as a team I just think we’ve got all bases covered,” Anderson said.

England will next face West Indies in a five-match series in the Caribbean in February. 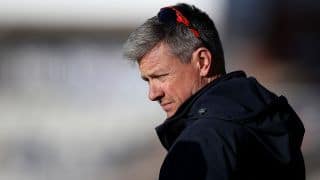