Sangkkara's century was followed by Angelo Mathews's ton towards the end of the day.

Sri Lanka ended day three of the first Test at Lords, 160 runs behind England’s mammoth first innings score of 160 and are looking well set to close in on the 160 run deficit they have against the hosts with Angelo Mathews going strong.
Kaushal Silva and Kumar Sangakkara held fort for Sri Lanka at the end of Day three. They were in command of proceedings with Lord’s wicket having little in it for the bowlers. Sangakkara, though went from strength to strength and brought up yet another hundred in what has been spectacular calendar year for the former Sri Lankan captain.

His cover-drives were in full flow and James Anderson, Liam Plunkett and Stuart Broad’s bowling wore a blunt look in the first session of the day’s play. Kaushal Silva made a fluent 63 but missed on converting it into a three-figure score. James Anderson dismissed him with a gem of a delivery. England’s misery though was far from over as Sangakkara’s good ol’ partner-in-crime Mahela Jayawardene walked into the centre.

The duo inflicted further damage and Sangakkara soon brought up his century, his first at the mecca of cricket, weeks before its 200th anniversary.  The veterans brought their hundred partnership up and became the highest run-getting partners across formats, beating Sachin Tendulkar and Sourav Ganguly’s record. The hosts clawed their way back into the game with quick wickets. Broad trapped Jayawardene in front and Lahiru Thirimanne gave Sam Robson his first Test catch of his career. Angelo Mathews then held fort and is closing in on a fighting century at the end of Day three. 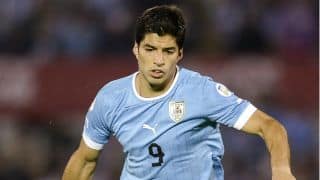