Ali is hoping time spent with Ajmal will enable him to bowl a 'doosra' in a Test match.

Moeen Ali is hoping time spent with Worcestershire team-mate Saeed Ajmal will enable him to become the first Englishman to bowl a doosra in a Test match. The doosra or ‘wrong one’ has become a key weapon in the armoury of many modern off-spinners as it turns away rather than into the right-handed batsman — the opposite of a conventional off-break.

Pioneered by the likes of Pakistan‘s Saqlain Mushtaq and utilised to great effect by Sri Lanka’s Muttiah Muralitharan, doubts over whether it is possible to bowl the ‘doosra’ with a legal action have meant few English bowlers have experimented with the delivery.

‘Mystery spin’ has been something for other teams, with England more than happy to settle for Graeme Swann‘s highly effective conventional off-spin.

But Swann retired during the 5-0 Ashes 2013-14 thrashing and England begin their first Test series since that drubbing in Australia when they face Sri Lanka in the first of a two-match series at Lord’s on Thursday where Ali is in line to make his Test debut.

Who are you talking about? Moeen Ali? We’re good at playing spin, so we just want to concentrate on how to bat against pace

Ali, primarily a batsman who bowls, has taken his 139 wickets First-Class wickets at an average of over 40 apiece.

But while his figures do not suggest a huge bowling threat, he believes working with Pakistan’s Ajmal — who England found all but unplayable in the United Arab Emirates three winters ago — on the ‘doosra’ could prove useful against a Sri Lanka side boasting conventional spinners only in Rangana Herath and Dilruwan Perera.

“I worked really hard with it over the last month or so,” Ali, who has already played three One-Day International (ODI) and six Twenty20 Internationals, told reporters at Lord’s on Tuesday.

“I bowled about eight in the last championship game, and in Twenty20s I’ve been bowling five or six each game. So far every one’s landed.”

As for Ajmal’s assistance, the 26-year-old Ali said: “He’s pushed me, given me a lot of confidence — it does take a bit of time, because you bowl a lot of full-tosses in practice. It’s embarrassing at times. But he said he did exactly the same thing, so that gave me confidence to just keep trying to do it.”

And Ali insisted that, unlike a number of ‘doosra’ bowlers who’d been reported for a suspect action, his delivery would stand up to scrutiny. “The umpires in the championship games and the Twenty20s said they don’t see any difference. Speaking to a lot of people, they say it’s pretty sound, and I’ll definitely be able to bowl it.”

Although Ali has yet to take a wicket with his doosra, he believes it’s just a matter of time. “Saeed says once you get one or two wickets with it, you start bowling it a lot more. I’m not sure I’m ‘mystery’ yet, but I hope in time I can become a mystery bowler.”

“Who are you talking about? Moeen Ali?” he said. “I don’t think the Lord’s wicket will turn. It will suit fast bowlers — the majority of records [here] belong to fast bowlers. We’re good at playing spin, so we just want to concentrate on [how to bat against] pace.”

Whether he succeed with his bowling or not, Mooen’s distinctive long beard, worn in deference to his Muslim faith, will certainly make him stand out.

Known as the ‘beard that’s feared’ in Worcestershire promotional literature, Moeen said it represented a ‘label’ for his religion.

“In terms of trying to inspire other people with faith to play, I am very proud of that. All the prophets, from Adam to Mohammed to Jesus, all these guys [had a beard]. It is a label for us to show we are Muslim, just how it is when you wear a uniform in school. It represents that you have to be on your best behaviour all the time.” 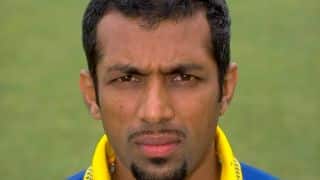