England dropped Eoin Morgan from their Test squad for the tour of Sri Lanka following the former Ireland batsman's dismal series against Pakistan in the United Arab Emirates (UAE). 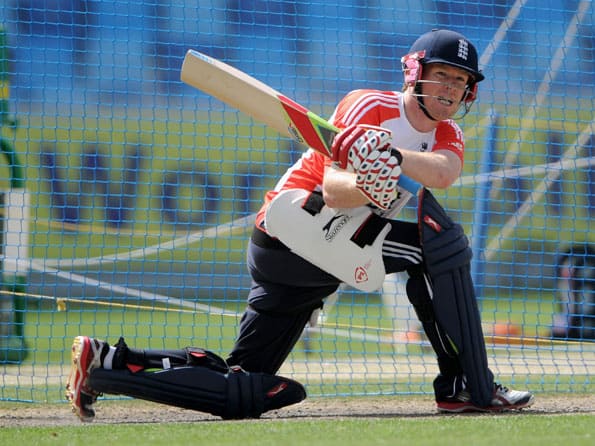 Eoin Morgan’s poor average of 13.66 in the three Tests against Pakistan could not save him from being dropped Getty Images

England dropped Eoin Morgan from their Test squad for the tour of Sri Lanka following the former Ireland batsman’s dismal series against Pakistan in the United Arab Emirates (UAE).

Middlesex left-hander Morgan averaged just 13.66 against Pakistan as England were whitewashed 3-0 in their first series since climbing to the top of the world Test rankings.

His omission has given a chance to spin bowling all-rounder Samit Patel, uncapped at Test level, who will compete alongside Ravi Bopara, a batsman and seam bowler, for a place in England’s middle order.

But England coach Andy Flower insisted Morgan could recover from this setback.

“He has been severely tested out there (UAE) by the Pakistan spinners as have all our batsmen.

“I still think he has a very exciting future in Test cricket, he’s only 25 years old and he’s a very talented player, a very confident player and a very dangerousplayer,” the former Zimbabwe batsman added.

Seam bowler and hard-hitting batsman Tim Bresnan returned to the squad after missing the Pakistan series with an elbow injury and Graham Onions, brought in as cover for the Yorkshireman, dropped out of the 16-man party that will again be captained by Andrew Strauss.

And with pitches in Sri Lanka, as was the case in the UAE, expected to take turn, Kent off-spinner James Tredwell — who played one Tests in 2010 — was called up to give England four specialist slow bowlers with Graeme Swann and left-armer Monty Panesar, who impressed against Pakistan, retained.

While the main squad will depart for Sri Lanka on March 10, seven members of the squad will travel there ahead of their colleagues to begin preparations for the Test series.

Geoff Miller, England’s national selector, said: “We have selected a squad that we feel will be able to make best use of the conditions we are likely to encounter in Sri Lanka.

“There is no doubt that this Test series will be a challenging one but it is exciting that players have an opportunity to demonstrate that they have learnt from the disappointment of the Pakistan Test series and can make further strides in developing the skills needed to succeed on the subcontinent.”

But while England struggled against Pakistan in Test cricket, their one-day side completed a 4-0 rout of Pakistan in the UAE before taking the Twenty20 series 2-1.

England will play the first of two Tests against Sri Lanka in Galle starting on March 26. (AFP)

Malinga's figures the worst in ODIs for a bowler bowling eight or less overs!