"I think the noise that it's created is brilliant, it's good news because you get the same people who love the game - like I do - coming to the game and complaining about it, because staying rigid is what we're used to and what we enjoy" - Eoin Morgan

London: Eoin Morgan has backed the idea of a 100-ball competition, proposed recently by the England and Wales Cricket Board (ECB), saying that he is a “big fan” of the format. The English domestic cricket is all set for yet another format of the game after the ECB had last week announced a revamped eight-team competition, which would see each side face just 100 balls.

The new domestic competition, starting in the summer of 2020, will see each side face 15 six-ball overs and another 10 deliveries in one over to make up a total of 100 balls. Morgan, along with England women’s captain Heather Knight and PCA chairman Daryl Mitchell, was briefed about the concept prior to the ECB’s announcement.

Though the concept received a lot of criticism for its lack of consultation during the process, the England skipper said that the “noise” around the concept was a “good sign” and that it would help in stimulating waning interest in cricket in the United Kingdom.”I think the noise that it’s created is brilliant, it’s good news because you get the same people who love the game – like I do – coming to the game and complaining about it, because staying rigid is what we’re used to and what we enjoy. But there’s a huge element of staying rigid that can eat away at the game an deter the popularity of the game and that’s a big worry. So the hundred format, I’m a big fan of it,” ESPNcricinfo quoted Morgan as saying.

However, it still remains unclear that at what time the extra 10 deliveries will be bowled and whether those deliveries will be made by just one bowler or more. The concept is 20 balls shorter than the traditional T20 format of the cricket, which is currently the shortest form of the game that is being played at the domestic level by different cricketing nations.

While there were speculations that broadcasters were looking for a shorter format of the game in order to better fit the fixtures, Morgan insisted that it was important to keep introducing new things in order to grow the game.”When they came to the idea of the 100-ball scenario, I really enjoyed it. It’s cricket at its simplest and coming from a background in an area that’s not very cricket orientated, I suppose I had a reasonable view on things, because I’m not tied to one format, or appealing to one certain audience. I want to get something forward that’s going to appeal to everybody,” he said.

The ECB had also confirmed that Southampton, Birmingham, Leeds, London, Manchester, Cardiff and Nottingham would be the venues for the new competition, which would also see each franchise have a men’s and a women’s team. 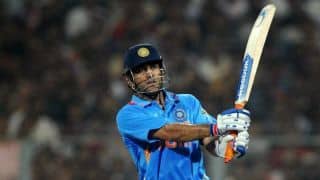