Morgan struggled against the pace attack of Archer, Robinson, Jordan, and Wiese.

England limited-overs captain Eoin Morgan did not find things easy in the 2018 County Championship match against Sussex, at Lord’s. Playing for Middlesex, Morgan was tormented by the Sussex pace attack throughout his 78-ball struggle of 6 (with a boundary to boot!) before Chris Jordan brought an end to his woes. Archer then bowled both James Fuller and Ollie Rayner as Max Holden, with an unbeaten 50, dragged Middlesex to 169.

The initial blows, however, came from the new-ball pair of Jofra Archer and Ollie Robinson, who quickly reduced Middlesex to 57 for 4. David Wiese, Sussex’s South African import, did his bit too, removing Nick Gubbins and captain Dawid Malan. The four seamers were incisive and accurate in their contrasting style, taking out the batsmen one by one.

In response, the Middlesex seamers were erratic, allowing the Sussex openers to score at six an over. Luke Wells and Philip Salt added 45 in 47 balls for the first wicket, but things slowed down once Ethan Bamber snared Wells. The middle-order batsmen did not hang around, and at stumps, Sussex still trail by 49 with four wickets in hand. 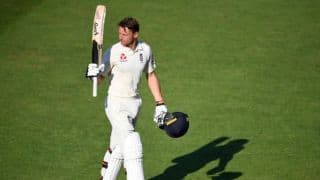