After embarrassing defeat in the Ashes series England have showed great character in the ODI series against Australia.

After embarrassing defeat in the Ashes series England have showed great character in the ODI series against Australia. They won the series 4-1 as the Test captain, Joe Root was rewarded as the Man of the Series.

Eoin Morgan while talking to ECB.co.uk. said he doesn’t want the team to get carried away ahead of the 2019 World Cup which would be hosted in England and Wales.

‘I don’t think we played well’

“The big thing I’d emphasis to come from this series was the character within the side. I don’t think we played well at all throughout the series,” Morgan said.

“I still think we have a while to go. The consistency with the bat has faded off a little bit and it had probably been our strongest point [previously].”

Morgan also praised the bowlers saying they have stepped up for the occasion whenever needed. Reflecting on the series he told the team has learnt a lot and their confidence is boosted.

“But on the other hand you’ve got some exceptional performances by the bowlers. They’ve stepped up in the series probably more than our batters.That’s a huge positive for us, particularly in 50-over cricket when you can go through lulls of not taking wickets. I thought our guys stood up really well.”

“We said at the start of the series we might learn a lot and might open up some cracks but I certainly didn’t think we’d learn as much as this or get quite so much confidence,” he concluded. 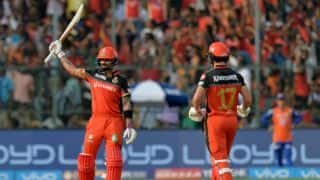