Eoin Morgan pointed out that Virat Kohli's wicket in the eighth over of the innings was a big moment in the first T20I.

Kanpur: England captain Eoin Morgan says their performance in the opening T20I was as complete as it could get on the long India tour, which saw them lose the Tests as well as the ODI series. “Yeah, I think so. It was a pretty complete performance. To win the toss and bowl, there is always a bit of pressure on bowlers to produce exactly what is needed on that particular wicket. Tymal Mills and Chris Jordan came in fresh and showed exactly why they are in the side. They were outstanding. Moeen Ali in the middle overs was outstandingly well. He did not get carried away, nailing his basics. It was a big factor in the game,” said Morgan, who hit a match winning 51 in the successful chase of 148. Full Scorecard: India vs England, 1st T20I at Kanpur

Morgan pointed out that Virat Kohli’s wicket in the eighth over of the innings was a big moment in the game. He also gave his thoughts on an early start to the game. “It was extremely important to get Virat out. The bowlers did an exceptional job. To keep him quite is always a good sign for us.” On the dew and wicket, he said: “There wasn’t a huge amount of dew in comparison to Kolkata but it is always nice chasing knowing exactly what you are going to chase”. All of his five specialist bowlers ended up completing their quota of overs. “I don t think I made the decision looking at the wicket. Blog: India vs England, 1st T20I at Kanpur

I looked at wicket in the 8-9th over, it had deteriorated a little and we decided to bring Liam [Plunkett]. It was the best option to give him the ball in the circumstances. The things that we are doing and when it works, it gives huge confidence to the side.” Morgan further said the execution of the slower balls helped England restrict India to under 150. “It [slower balls] was executed really well. The bowlers did not bowl bad slower balls. The slower balls are of two types, the good ones and the bad ones. Today, they bowled really well. ”

Morgan also praised opener Sam Billings and Jason Roy for a flying start. While Roy has been in top form, Billings too has impressed in the two chances he has got in the limited overs series. “I feel he [Billings] is in outstanding form at the moment. I watched the Big Bash game a few days ago and he was great. He strikes the ball as well anybody.” Morgan himself has been in good form with scores or 51, 43 and 102 in his last three innings. Talking about playing his 150th ODI for England in Kolkata, the former Irish player said milestones do give him a sense of satisfaction.

“They do give me little bit of satisfaction. Never imagined when I started that I will end up playing so many games for England and scoring these many runs. Though it doesn’t mean much if you are not winning games. It is most important to win games,” he added. 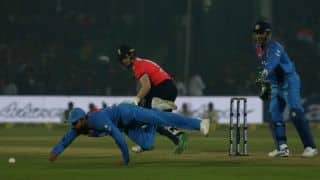