Eoin Morgan took no solace in his own ton that took England close but being unable to cross the line while chasing a mammoth target of 382 vs India in 2nd ODI.

Cuttack (Odisha): Disappointed after losing the three-match ODI series following a 15-run defeat in the second ODI against India, Eoin Morgan, England s limited over skipper, has admitted that his side weren t good with both bat and ball in Cuttack. Comeback man Yuvraj Singh (150) and former captain MS Dhoni (134) put on 256 runs for the fourth wicket to help India post a mammoth 381-6 after being put into bat at the Barabati Stadium on Thursday. The Virat Kohli-led side then restricted England to 366-8, despite a breathtaking century by Morgan, who smashed 102 off 81 balls. Again we took early wickets, which is a good sign but letting two experienced guys get in like that and struggling to break the partnership throughout was probably due to not executing our plans well enough, Morgan said in the post-match press conference on Thursday.

We weren t at our best today with the ball. When a bowler doesn t get it right on the day, which can happen, you try different things. When you re trying different things to two guys who are really in they can really hurt you and they did, he added. Morgan, who scored a gritting century, his first century in 18 months, took no solace in his own ton that took England close but being unable to cross the line while chasing a mammoth target of 382.

No, it doesn t work like that at all. It actually works the opposite way, he said. It s a pretty disappointing day. More often than not when you perform the side wins and they say well done. When you lose there s absolutely no satisfaction at all, he added. The third and the inconsequential ODI between the two teams will be played in Kolkata on Sunday ahead of the three-match T20 series. 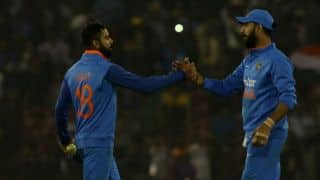