The victory in the fifth ODI has given England confidence, said Morgan.

England T20 International captain Eoin Morgan on Saturday said his side will take a lot of confidence from its 41-run win over India in the fifth and final One-Day International (ODI) when the two sides meet for one last time this summer at Edgbaston, Birmingham on Sunday. India won the five-ODI series 3-1, but England managed to post a much-needed win in the last one-dayer at Leeds on Friday to avoid a whitewash.

“It was a huge boost. We had not competed in the first three games we’ve played against India. They are a very strong side and they did not let us play and all credit to them. But for us to stand up yesterday and for Joe Root to put in the performance that he did, in difficult circumstances and given the situation when he came in, it was exceptional. We can take a lot of confidence from that,” said Morgan at the pre-match press conference.

Middle order batsman Morgan’s own form though has been a bit of a pale shadow. Thanks to England’s top-order troubles, he has failed to get going. The hosts could cross the 250-run mark only once in the ODI series and that to in the final one-dayer. “It’s been extremely disappointing. I’ve worked incredibly hard this year on my all-round game but I have been light on runs. I can’t pinpoint exactly where it’s going wrong,” the T20 captain said. “I’ve found different ways of getting out the majority of the time. It’s never been easy as international cricket isn’t. I’ve gone through periods likes this before and I’ve always come back well, so I’m quite confident I will,” he added.

Asked if this might affect his captaincy, Morgan replied, “The scores I’ve had when I’ve captained, it hasn’t seemed to have affected my batting at all. But then again, we only go by runs.” Alastair Cook also went through a similar phase as the England Test and ODI captain this summer. While he was able to turn it around in the longer format, the 50-over format escaped Cook and the England and Wales Cricket Board (ECB) have scheduled a crisis meeting early next week to consider the ODI series loss to India.

“Cook has been exceptional this summer. He’s been under the pump quite a lot and in challenging times in English cricket at the moment, he’s come out really well. I think with the transition as well the team is going through, it can be difficult at times especially being the captain,” said Morgan. “But given the experience that he’s had both in his playing and captaining career, he’s been outstanding dealing with it.”

When asked pertinently if Cook was indeed the right man to lead England to the ICC World Cup 2015, Morgan replied, “Yeah, absolutely. I have confidence in him. I have a huge amount of respect for him, both as a player and as a captain, and again I look forward to him leading the side out in Sri Lanka and in the World Cup.”

Recently, Sir Ian Botham had criticised the Indian Premier League (IPL) in his ‘Spirit of Cricket’ lecture, that led to huge debate about England’s limited-overs credentials that perhaps not playing in the IPL has harmed their chances when compared to the fearless ODI and T20 cricket displayed by the Indian team.

Morgan, who is one of the few English players to be regularly featuring in the IPL, said he had learnt a lot while playing in the cash-rich tournament. “In my experience of the IPL, I have thought wonders of it. I spent four seasons playing with Jacques Kallis, one with Rahul Dravid, Brendon McCullum and Brett Lee, guys I would never have had an opportunity to play with and learn from solely playing at Middlesex, so I’m very grateful for that. I learnt a lot from those guys.

“The experience of watching the very best players go about their business is huge, so I’m a massive fan. I think it has made me a more skillful player both in Twenty20 and 50-over cricket. Being thrown-in in some of those intense situations, playing in front of huge crowds, it is awesome and again a tough experience, but one that holds you in good stead down the line,” Morgan concluded. 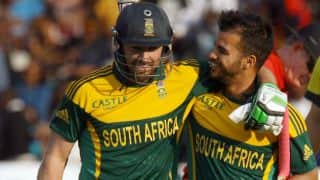 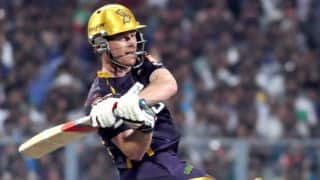