England's Eoin Morgan insisted on Monday that he had no regrets over his controversial decision to skip last year's tour of Bangladesh, ahead of his return to the one-day captaincy in India this week.

England’s Eoin Morgan insisted on Monday that he had no regrets over his controversial decision to skip last year’s tour of Bangladesh, ahead of his return to the one-day captaincy in India this week. Morgan, skipper of England’s Twenty20 and 50-over sides, came in for criticism for opting out of the Bangladesh series over security concerns, with several commentators saying his decision had damaged his authority. But speaking to journalists in Mumbai, where England play two warm-up matches this week before their first ODI against India on Sunday, Morgan said he was comfortable with the decision and it was now time to move on.

“I don’t regret that at all. It was a decision I’m very comfortable with,” Morgan said. “It was a decision I considered all consequences (to) when I did. Sitting here or sitting at home I would have been very comfortable with it.” Jos Buttler stepped up to the captaincy when England played three ODIs in Bangladesh in October, with Morgan opting out of the tour in the wake of a deadly attack on a cafe in Dhaka which was popular with foreigners. Former England skipper Nasser Hussain said Morgan had “let England down” by staying at home.

Another ex-captain Michael Vaughan wrote in the Daily Telegraph that players would not forget how their leader “went missing at a difficult time”.

Morgan, who has recently been playing T20 cricket with the Sydney Thunder franchise in Australia’s Big Bash League (BBL), denied it had felt weird to link up with his international teammates again.

“No, not at all, I was extremely excited. I think a major part of that was getting some cricket under my belt in the run-in to the series, which I’ve managed to do,” said Morgan.

“I’m really excited about the upcoming series and the next five, six months, which is going to be a big part in our lead towards the World Cup” being staged in England in 2019.

After the Bangladesh tour, England were hammered 0-4 by India in a five-match Test series under the captaincy of Alastair Cook. But England’s short-form cricket has shown a big improvement since they crashed out of the 2015 ODI World Cup. They were the beaten finalists in last year’s World T20 tournament in India.

Senior batsman Joe Root is expected to be back in the side for the first ODI in Pune after staying back for the birth of his child, although Morgan indicated that he could be rested at some stage.

After the three ODIs, the two teams will play three T20 internationals. 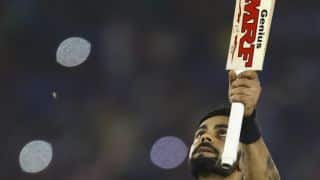