The experience of watching the very best go about their business helped Morgan.

Eoin Morgan defended the Indian Premier League as he prepared to captain England in their lone Twenty20 international against India at Edgbaston on Sunday. England great Ian Botham used his MCC Cowdrey Lecture at Lord’s earlier this week to call for the domestic Indian Twenty20 franchise competition to be shut down, saying it was “too powerful” and that it “compounded” the problem of corruption within world cricket.

But Middlesex batsman Morgan, one of the few current England internationals with IPL experience, insisted playing in the tournament had been hugely beneficial in his development as a cricketer. “Certainly my experience of the IPL, I thought wonders of it,” the 27-year-old former Ireland international told a news conference at Edgbaston on Saturday.

“I spent four seasons playing with Jacques Kallis, one with Rahul Dravid, Brendon McCullum, Brett Lee, guys I would never have had an opportunity to play with and learn from solely playing at Middlesex, so I’m very grateful for that,” explained Morgan,

“The experience of watching the very best go about their business is huge. I think it made me a more skilful player both in Twenty20 and 50-over cricket,” said Morgan, who represented both the Kolkata Knight Riders and the Royal Challengers Bangalore in the IPL.

“Being thrown-in in those situations, playing in front of huge crowds, is awesome and a tough experience but one that holds you in good stead down the line.”, he added. 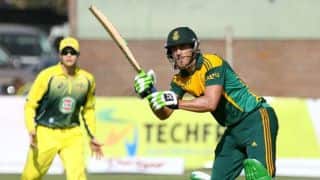