Observing that 150 was a decent target to set, Kings XI Punjab skipper Adam Gilchrist on Friday singled out Kolkata Knight Riders' batsman Eoin Morgan's blistering 26 ball 42 for taking away the game from the visitors. 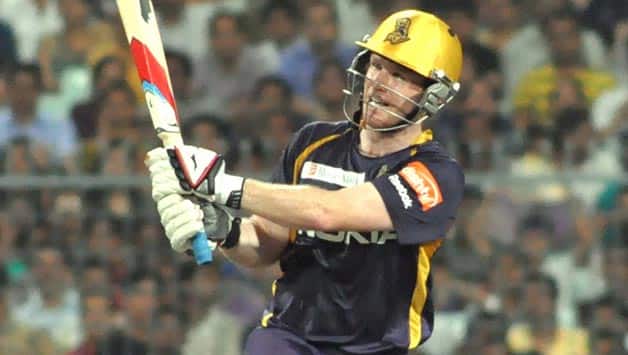 Observing that 150 was a decent target to set, Kings XI Punjab skipper Adam Gilchrist on Friday singled out Kolkata Knight Riders‘ batsman Eoin Morgan‘s blistering 26 ball 42 for taking away the game from the visitors.

“Morgan was the difference. He took the game away from us. I think 150 was a decent total. But even if we had posted 10 runs more it wouldn’t have mattered because of the way Morgan played. We were right in the hunt until he arrived,” said Gilchrist after his side suffered a six-wicket defeat to KKR at the Eden Gardens.

The southpaw said he was surprised to see Knights’ all-rounder Jacques Kallis, who was injured in KKR’s earlier match, turn up for the Friday’s game.

“Jacques and [Manvinder] Bisla did very well to steady the ship, but Morgan was the difference at the end. Though Jacques was very good with both the bat and the ball. To be very frank, I thought Jacques won’t turn out for the game. He surprised us,” said the wicket keeper batsman.

Bisla top scored with a 44-ball 51, while Kallis struck 37 runs with the bat and returned figures of 2 for 14 with the ball.

The glovesman, who has been struggling with the bat, conceded that the double task of keeping and captaining was putting pressure on him.

“There is bat, gloves, captaincy… I have underperformed till now but I have practised for this tournament more than any other. But nice to get some runs in the middle. But it is disappointing and frustrating to get out after getting a start.”

“I am not obviously hitting the ball as well as I did in my prime, but I am not shattered by that. I am surely enjoying my stint,” he said.

Gilchrist, who averaged an embarrassing 9.5 coming to this match looked good for his run-a-ball 27, before he got out playing a big shot.

With batsmen around him playing innovative shots and going for improvisations to score quick runs, the former Australian opener said he was always more of a hitter than an innovator.

“Obviously, innovations have been there in the game earlier, it is just that the frequency of innovative shots have increased manifold. I was flabbergasted to see [South African] Jonty Rhodes play a reverse sweep in the 1990s,” he said adding that the modern ways of T20 batting were affecting Test match batting.

“I was more of a hitter of the ball than going for innovative shots. These have affected Test match batting. I am not here to pass a judgement, but then that sort of questions are being raised,” he added.

Defending his bowlers, Gilchrist said: “It was very sweaty and moist out there. In both innings, the ball was difficult to grip. Overall, the bowlers have performed admirably.”

Their last match’s hero Harmeet Singh had an off day with the ball and Gilchrist said, “He started well today. Probably he would be a bit disappointed with the way he executed a few of his deliveries.”

“Harmeet bowled a terrific ball right on the middle stump line but it disappeared to fine leg for four. It is impressive. That takes the question to what’s affecting batting in Test cricket, if it is or not… I’m not here to pass judgement but in this format it’s wonderful.”