Eoin Morgan has replaced Alastair Cook as the new captain of  the England One-Day International (ODI) side. Following a string of disappointing performances Cook was sacked by the England as captain and been left out from the ICC World Cup 2015 squad  by  England and Wales Cricket Board (ECB) on December 19. Morgan had previously lead England on eight occasions. Morgan will lead England in the tri-series, which will be played in Australia between India, England and Australia ahead of the ICC World Cup 2015

James Whitaker, National Selector, said: “We spent a considerable time yesterday discussing the make up of a squad that gives England the best possible chance of success at the World Cup which begins in less than two months. Having reviewed the recent series against Sri Lanka we came to the conclusion that there was no place for Alastair Cook amongst our strongest 15 one-day players and therefore recommended Eoin Morgan be appointed One-Day captain,” according to ecb.co.uk.

Cook will however continue Test Captain. Paul Downton, Managing Director England Cricket, said: “I have complete confidence in the decision made by the selectors and having spent time with Alastair yesterday he accepts that it has been made in the best interests of the one-day side”.

Alastair Cook said: “I am gutted to be left out of the World Cup squad and it is likely to take me a while to get over the disappointment. That said I wish Peter, Eoin and the lads all the best for the World Cup. I would also like to thank all the players and fans who have supported me during my time as One-Day captain.” 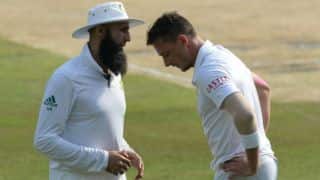