Sunrisers Hyderabad (SRH) have posted 142 for 7 in their IPL 2016 match against Kolkata Knight Riders (KKR). Eoin Morgan scored 51 off 43 balls while Naman Ojha gave him a helping hand. Umesh Yadav was KKR’s star bowler as he took a three-wicket-haul and gave just 28 runs in his four overs. SRH’s skipper David Warner won the toss and elected to bat first. He took a couple of runs towards the fine leg off the very first delivery of the match. He was fortunate the next ball as he was caught off a short ball by Morne Morkel which was called a no-ball. Warner attempted a pull but could not middle the ball and ended up top-edging it to Piyush Chawla. LIVE CRICKET SCORECARD: Sunrisers Hyderabad vs Kolkata Knight Riders, IPL 2016, Match 8 at Hyderabad

Morkel then bowled a slow length ball next up which was a free hit. Warner tried to execute a similar pull shot but failed to get any run. He then hit the penultimate ball of the over for a four over the covers. Nine runs came off the first over. Umesh Yadav then bowled a tight second over giving just five runs. Dhawan then got down the track off Morkel’s bowling in the next over and tried to hit him over the backward point. Robin Uthappa took a good one-handed catch. Umesh joined the party in the next over by sending Warner back to the dugout. Warner tried to hit his off-cutter towards extra cover but failed to judge the pace of the ball. Suryakumar Yadav took a nice catch at short cover region.

After four overs, SRH were 26 for the loss of 2 wickets. Left-arm orthodox bowler Shakib Al Hasan was then handed the ball. He bowled a good first over giving only four runs. Moises Henriques and Eoin Morgan were at the crease and they were trying pretty hard to steady the ship. However, they did play some unconventional shots. Henriques was soon trapped leg-before by Umesh. Deepak Hooda replaced Henriques. Sunrisers Hyderabad were 43 for 3 when eight overs were completed. Sunil Narine was then brought into the attack and he gave five runs the next over. LIVE BLOG: Sunrisers Hyderabad (SRH) vs Kolkata Knight Riders (KKR), IPL 2016, Match 8

After the strategic time-out, both the batters tried to rotate the strike but they did not succeed in doing so. With pressure of runs piling up, Hooda attempted a slog and nailed it down the throat of Umesh stationed at long-on. SRH were able to score only three runs off the 11th over which was bowled by Narine. Naman Ojha carted a four towards deep backward point off Andre Russell the next over. This was after he had picked up two couples off the first two balls of the over. Morgan hit two back-to-back boundaries off Narine’s bowling in the next over. Piyush Chawla came to bowl his first over which was the 14th of the innings. Ojha welcomed him with a four by sweeping him towards the fine leg region. Morgan ended the over with another four, this time at third man.

Ojha got down on one knee and swept Narine for maximum at deep backward square leg in the 15th over of the innings. This was the much awaited first six of the match. Hyderabad reached 94 for 4 after 15 overs. Morkel bowled a short ball but was not not able to aim it towards Ojha’s body. The batter took advantage of it, made some room and hit it for another six by cutting it towards the third man region. This was sheer timing taking full advantage of the pace of the delivery. Ojha was batting on 32 from 23 balls at that moment. After some fine display of restrictive bowling in the first five balls, Morgan hit Shakib for a six off his final ball.

Three overs were remaining and SRH had only reached 115 and they had lost 4 wickets in the endeavour. Russell took a beauty at long-on with help from Chawla to dismiss Ojha. Morgan was the next to go as he got caught at deep mid-wicket trying to hit hard but not getting his timing right. Ashish Reddy, who came next hit a maximum at the same region. They were much needed six runs for the team. Karn Sharma gave only six runs in the final over and took the wicket of Reddy. La Liga 2015-16: Barcelona face Valencia with top spot in the table at stake 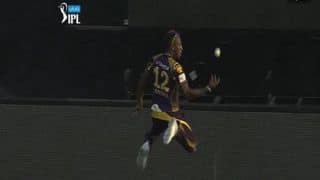