Speculations were rife that Karthik's World Cup dreams are over after the selectors dropped him for the five-match ODI series at home against Australia -- India's last assignment before the World Cup.

Drafted into India‘s World Cup squad as a back-up wicket-keeper, Kolkata Knight Riders skipper Dinesh Karthik feels focus will be back on IPL now that the selectors have picked the 15-man team for the showpiece event.

Speculations were rife that Karthik’s World Cup dreams are over after the selectors dropped him for the five-match ODI series at home against Australia — India’s last assignment before the World Cup.

The MSK Prasad-led selection panel had named Rishabh Pant in the squad for the Australia series, thus hinting that the youngster might be making the cut for the World Cup instead of Karthik.

But with his vast experience, the Tamil Nadu glovesman pipped Pant in the 15-member squad for the World Cup last Monday.

“Now that the team has been picked all those have been part of team have been announced, I think the focus back on IPL. I think everything is back on track,” Karthik told reporters on the eve of their IPL clash against Royal Challengers Bangalore at Eden Gardens.

“All the players are looking forward to a clean slate of games and some good cricket being played in the next few rounds. It’s a fabulous tournament to be a part of, every franchisee is giving everything they have to you, so lift that coveted trophy.”

After starting their campaign on a smooth note, KKR slipped out of number two position and now find themselves at number six after a string of three defeats in a row.

Bottom-placed RCB, on the other hand, will face a do-or-die scenario and Karthik doesn’t want to take the Virat Kohli-led side lightly.

“RCB are a very good team and we’re all aware of it. I think every game is going to be important in this space of the tournament and taking one game at a time and giving the best that we can,” he said.

On Kohli and AB de Villiers presence, he said: “They two are world class players we are very aware of that I think you know, they get going they are hard to stop.

“We need to focus on our ability, hit good areas and make sure it’s as hard as it is for them to bat on on that day. I think that’s what we will be looking to do. At this stage, every game is very important irrespective of whoever the opponents.” 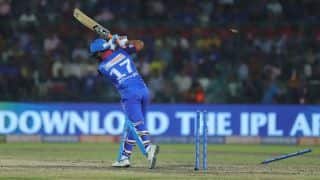