India's adored cricketers put on an awesome display of power to whitewash England 5-0 in the one-day series at home - a mighty achievement that was played out in front of rows of empty seats. 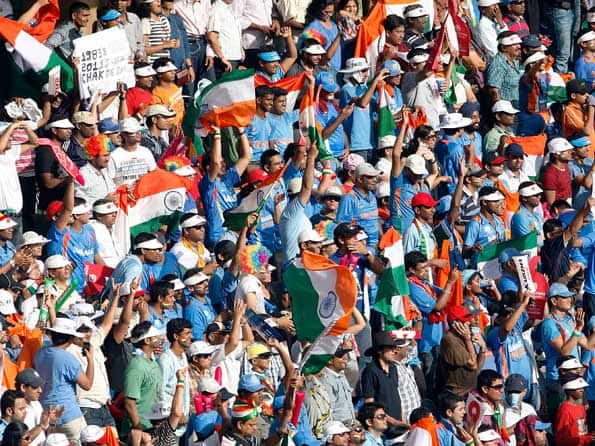 India’s adored cricketers put on an awesome display of power to whitewash England 5-0 in the one-day series at home – a mighty achievement that was played out in front of rows of empty seats.

For a country famed for its love of cricket, the sparse crowds were a shocking revelation that has sparked a debate about how the sport treats both its fans and its stars.

High ticket prices and too many tournaments are seen as two prime suspects behind the sad sight of Indian heroes such as Mahendra Dhoni, Virat Kohli and Suresh Raina competing against a backdrop of plastic seats.

The 45 000-capacity Wankhede stadium in Mumbai, which was fully renovated for this year’s Cricket World Cup, suffered its worst turnout for an international game since 1975 with just 13 000 tickets sold for Sunday’s clash.

In the final fixture on Tuesday, the iconic Eden Gardens venue in Kolkata echoed to the sound of bat on ball instead of being a seething cauldron of passion, as could once be guaranteed by loyal and excitable followers.

Decent – though far from sell-out – crowds attended earlier games in Hyderabad and New Delhi, but Mohali was less than half-full to witness India take an unassailable 3-0 lead in the five-match series.

“It is a clear sign of fatigue,” popular television commentator and sports analyst Harsha Bhogle said.

“People need to get excited about a contest, but with one series following another the sense of excitement and anticipation is not there.”

India won the World Cup final at the Wankhede on April 2, triggering a nationwide party, before the players headed straight into the Indian Premier League (IPL), then a tour of the West Indies, before going to England.

The Indians were thrashed 4-0 in the Test series in England, losing their number one ranking, and were blown away 3-0 in the one-dayers.

“They call this one the ‘payback’ series but it is nothing compared to India’s World Cup win,” Amrit Mathur, chief operating officer of the IPL team Delhi Daredevils, said.

“It is difficult to get easily excited about a game so soon after that high. People won’t pay to watch any game.”

Mathur pointed out the absence of injured top players such as Sachin Tendulkar, Virender Sehwag and Yuvraj Singh. “It matters… these players pull in the crowds,” he said.

Much attention on television and in newspapers has focused instead on India’s inaugural Formula One Grand Prix on Sunday, though cricket’s dominance of the sporting scene in India does not seem under long-term threat.

Even so the poor turnout has amazed and disappointed Indian cricket experts, who had come to expect every one-day international at home against top-class competition to sell out rapidly.

The Board of Control for Cricket in India, which has become hugely wealthy and influential due to the country’s passion for the sport, admits there have been problems but it denies that fans have overdosed on action.

“We got good crowds for the first two games in Hyderabad and New Delhi, so it can’t be that people are tired of watching,” BCCI secretary Sanjay Jagdale said.

“Of course the low turnout at some matches has surprised me. We usually get full houses for one-day games. The Diwali (festival) period could be one of the main reasons.”

With the fixture list becoming more and more intense, there appear few easy answers to falling sales except to cut ticket prices from the current level of 500-1000 rupees ($10-20) for a cheap seat.

Basic consumer care is also a widely-ignored cause for concern.

Spectators are forced to wait for hours to pass through security checks, then have all food and water taken off them, and are not given a numbered seat.

After six or seven hours at a game, even the keenest fans find their enthusiasm tested when thirst and hunger strike and inadequate concession stalls run out of supplies.

With the West Indies arriving for yet another Test and one-day tour starting on November 6, the sorry spectacle of empty seats at Indian games looks set to only get worse. (AFP)