Laxman feels India should focus on their top three batsmen to get some runs after missing out in the West Indies.

VVS Laxman expects India’s top order to fire when they take on South Africa in the first Test starting Wednesday. India, leading the points table of the World Test Championships will be playing their first Test at home since October last year and will focus on the top three batsmen to get some runs after missing out in the West Indies.

“The start of a new home season is always exciting, but because India has only played three Tests at home in the last 21 months, the sense of anticipation will be more pronounced when they take on South Africa in a three-match series. Having made a cracking start to their World Test Championship campaign by picking up the full complement of points in the Caribbean, this is a great chance for Virat Kohli’s boys to gain further momentum, though, from the team’s point of view, the target will be to play high-quality cricket which will automatically bring the desired results,” Laxman wrote in his column for Times of India.

“There will be a lot of focus on the top-order, which didn’t exactly fire in the West Indies. Mayank Agarwal showed glimpses of his potential but didn’t kick on to make big scores, something he will look to rectify over the next three weeks. But of greater interest will be how Rohit Sharma takes to opening the batting in Tests.”

Rohit received support from his captain Virat Kohli ahead of his first Test as India opener. He was dismissed for a two-ball duck against South Africa in the three-day warm-up game but Laxman, understanding the virtue of patience, believes Rohit can excel as an opener provided, he doesn’t change his instincts much.

“Rohit is a very experienced and mature player and has tasted great success as opener in white-ball action. Test cricket will place different demands, but while he must have his plans in place, it is essential for him not to veer too much from his natural game,” the former batsman added. “He will realise the value of starting his new avatar as an opener at home, where it is easier to front up to the new-ball, and I expect big things of him. I also expect Cheteshwar Pujara to rediscover run-making ways because he and Virat form the fulcrum of the Indian batting in the five-day game.”

India announced their Playing XI on the eve of the match, its biggest takeaway being the inclusion of Wriddhiman Saha ahead of Rishabh Pant, and while it was a decision which was widely discussed, Laxman reckons Saha edges Pant when it comes to playing at home, while having an advice for the under-fire young wicketkeeper-batsman.

“With Wriddhiman Saha back to full fitness and given recent form, it’s no surprise that he is back in the eleven ahead of Rishabh Pant. Especially on Indian pitches, the better keeper must don the gloves. I believe Pant should be released to play for Delhi in the Vijay Hazare Trophy because there is nothing better for confidence than a bucketful of runs,” Laxman added.

The absence of Jasprit Bumrah due to a stress fracture is a big blow but Laxman feels the presence of Ishant Sharma and Mohammed Shami makes up for it. The Vizag Test will also see the return of R Ashwin, after not featuring in India’s Playing XI in the two Tests in the Caribbean last month.

“While Jasprit Bumrah’s absence through a stress fracture is a big blow, India’s attack in recent times hasn’t depended on any one individual,” Laxman said. “Ishant Sharma and Mohammed Shami can be a handful even on Indian surfaces, while I can’t wait to see R Ashwin back in action. The offspinner is a proven and pedigreed performer. My only concern is that because he hasn’t played Test cricket for a while, he shouldn’t be over-anxious for wickets. Otherwise, he and Ravindra Jadeja are as good a spin combine as any in the world.” 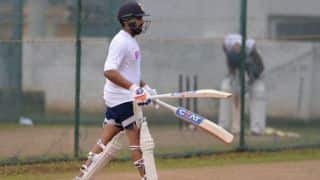