The first day-night Test in Britain saw England thrash a hapless West Indies by an innings and 209 runs inside three days on Saturday.

Joe Root said he felt “extremely privileged” in captaining three of England’s most successful Test cricketers after Alastair Cook, James Anderson and Stuart Broad all starred in a series-opening rout of the West Indies at Edgbaston. The first day-night Test in Britain saw England thrash a hapless West Indies by an innings and 209 runs inside three days on Saturday. Cook, England’s all-time leading Test run-scorer with 11,568 in 145 fixtures, was named man-of-the-match after making 243 in a total of 514 for eight declared. Together with Root, his successor as England captain, Cook shared a third-wicket stand of 248 of which the Yorkshireman’s share was 136. The skippers past and present came together when England were briefly in trouble at 39 for two.

But from then on it was one-way traffic, with Anderson making early inroads in both innings as West Indies, made to follow-on by Root, were skittled out for 168 and 137. For all the fears about how the pink ball would behave under the floodlights, most of the damage during an extraordinary Saturday where the West Indies lost 19 wickets in total came during daylight hours. Broad did, however, shine at an illuminated Edgbaston as he moved past Ian Botham’s tally of 383 Test wickets and into second place in England’s all-time list behind new-ball partner Anderson. His final second-innings figures of three for 34 in 10 overs were impressive enough but the paceman’s career has been littered with dramatic wicket-taking bursts. Saturday’s haul was no exception as Broad rocked the West Indies with a spell of three for four in 11 balls, including two in two before he was denied what would have been his third Test hat-trick.

It left Broad with 384 wickets in 107 Tests at an average of 28.47, while Anderson, four years older at 35, remained out in front on 492 wickets in 127 matches at 27.71. “We all know the class and skill these guys have, and we’re so fortunate to have those guys rolled into one era,” said Root, with England now 1-0 up in a three-match series ahead of Friday’s second Test at his Headingley home ground.”All three of the senior guys, the record-breakers, set the standard.” The 26-year-old top-order batsman, who launched his career as England captain with a 3-1 win over South Africa in a four-match home Test series concluded last month, was well aware of his good fortune in being able to call upon Anderson, Broad and Cook.

“To have the two leading (England) wicket-takers and the leading (England) run-scorer in the side, you have to be careful not to take that for granted. I’m extremely privileged to play in the same team as them and what a place for young guys to learn, with that great experience and so many runs and wickets behind them.”For Broad, whose father Chris played in the same England side as Botham, surpassing the star all-rounder’s tally of Test wickets was a landmark moment in his career. He’s obviously been a hero of mine, someone who gave me my Test cap back in 2007 and someone who inspired me to play cricket for England,” said the 31-year-old.

“It’s very special to be up there in the ranks with him.”As for this latest victory, Root said: “It was a fantastic team effort.”We spoke about carrying on the hard work from the last series — I thought we did that exceptionally well.” England now have two more Tests against the West Indies before what is bound to be the sterner challenge of defending the Ashes in Australia.”It’s important we don’t get ahead of ourselves, but it (this win) has filled us with confidence,” added Root. 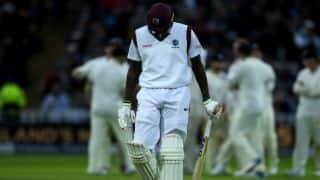