The South African batsman reached the landmark in only his 15th Test.

Du Plessis has reached the landmark in just his 15th Test match. The South African who made an impressive debut scoring an unbeaten 110 to save a Test match, has displayed grit and determination throughout his career. His fielding skills too are quit impressive, and he has taken several acrobatic catches for the Proteas. 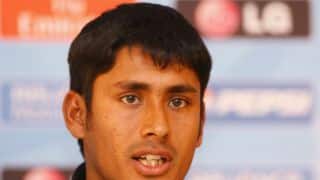