Ankit Sharma was the bowler, but it was an excellent catch from Chris Morris that earned him the wicket.

Faf du Plessis played an irresponsible shot  to get out for one in Match 15 of Indian Premier League (IPL) 2015 between Rajasthan Royals (RR) vs Chennai Super Kings (CSK) at Ahmedabad on Sunday. Ankit Sharma was the bowler, but it was an excellent catch from Chris Morris that earned him the wicket after du Plessis tried to go over long off as CSK crashed to 39 for three. Live Scorecard: Kings XI Punjab (KXIP) vs Kolkata Knight Riders (KKR) IPL 2015 Match 14

Earlier, Pravin Tambe dismissed Brendon McCullum in his first over to reduce CSK to 16 for one in the third over. Chris Morris then got Suresh Raina to edge one behind to Sanju Samson for four to leave CSK in a spot of bother at 38 for two. Live Updates: Kings XI Punjab (KXIP) vs Kolkata Knight Riders (KKR) IPL 2015 Match 14

CSK skipper MS Dhoni won the toss and chose to bat first. CSK went in with the same side that won them their first three games, which meant that Irfan Pathan still does not get a match. On the other hand, RR made one huge change as their regular captain Shane Watson made a comeback to the side at the expense of Tim Southee, while Ankit Sharma came in for Dhawal Kulkarni. Indian Premier League (IPL) 2015: Complete coverage 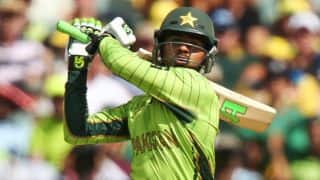