Currently, South Africa are 35 for the loss of two wicket in four overs against India in ICC World T20 2016 warm-up match at Mumbai.

South Africa top order batsman Faf du Plessis was dismissed for mere 12 by fast-bowler Mohammed Shami, after being caught by Ravindra Jadeja, against hosts India in the ICC World T20 2016 warm-up tie at the Vidarbha Cricket Association (VCA) Stadium in Nagpur on Saturday. Currently, South Africa are 35 for the loss of two wicket in four overs, with opener Quinton de Kock batting on 14 and JP Duminy on nine. Earlier, South Africa won the otss and elcted to bat first. As this is a warm-up tie, the full 15-member squad is eligible to play the match, and the match is being not counted as an international game under the rules of the International Cricket Council (ICC). Full cricket scorecard: India vs South Africa, ICC World T20 2016, warm-up match at Mumbai 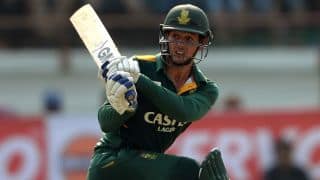