"It's lush, it's green, it's soft, it's wet. It will seam and swing, it won't reverse that much. To say it was only for us is definitely not true," said Faf du Plessis.

There has been much talking for the second of the three-Test series between hosts Australia and visitors South Africa at the Bellerive Oval in Hobart, especially regarding South Africa’s success with the reverse swing. Australia’s Josh Hazlewood has made his intentions clear to do the same with the ball. Also South Africa have made it clear that they would not just enjoy bowling reverse swing, but would also love to bat against reverse swing, as was done by Dean Elgar. However, it was recently, when Faf du Plessis stated that the reverse swing would be tough to generate in the soft tracks at Hobart. LIVE CRICKET SCORECARD: Australia vs South Africa, 2nd Test at Hobart

“Perth was really dry, the wicket was hard. That second new ball we took on the last day, it was three overs in and there were big chunks out of the ball. Here will be different. It’s lush, it’s green, it’s soft, it’s wet. It will seam and swing, it won’t reverse that much. To say it was only for us is definitely not true. I faced a brilliant spell from Starc, bowling around the wicket, reversing the ball a hell of a lot. It was extremely difficult. I think it was exactly split down the middle 50-50 in terms of reverse,” said du Plessis, reports espncricinfo.com. LIVE Cricket Updates, Australia vs South Africa, 2nd Test, Day 1 at Hobart

“We were watching the first innings and they got the ball to reverse in the 25th over. I was quite impressed. I was trying to see how they were doing that because it meant they were getting something right. They were getting it to go early. We had batters that were in and batted for long periods of time When you’ve got big partnerships, it just looks easier. I remember in the second innings I came in and the first ball nipped and swung and I was like, ‘What is going on here? These guys have got a partnership of about 300, it should be a lot easier than this’,” he added.

“If you get a wicket, reverse-swing will always be more difficult for guys coming in. That’s a fact. They just lost more wickets, that’s why it was a little bit harder for them. I think, to be really honest, it’s been blown out of proportion a little bit,” he concluded. 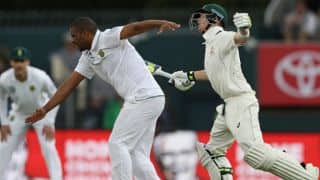