Faf du Plessis will be replacing AB de Villiers who led South Africa in 103 ODIs, winning 59 of them.

Cricket South Africa have confirmed Faf du Plessis as the country’s skipper across formats. Faf replaced his old friend and teammate, AB de Villiers, whose captaincy came under the radar after an unsuccessful tour of England (including ICC Champions Trophy). Faf has already led in ODIs, all in de Villiers’ absence, and is currently the man in charge in T20Is and Tests. His captaincy has already won accolades, and is currently involved in World XI’s tour of Pakistan. He will lead tourists in a landmark series for the subcontinental side.

CSA chief executive Haroon Lorgat said in a statement, “Congratulations to Faf on his appointment as the natural successor to the ODI leadership. He has established himself as one of the best leaders in world cricket and this was reflected in his appointment as the captain for the World XI currently engaged in the T20 Series against Pakistan.” Faf’s first stint as full-time ODI captain will be against Bangladesh next month.

Faf already boasts of some memorable moments as skipper in all formats. He led South Africa to an ODI series whitewash versus Australia at home in 2016. South Africa also qualified for the semi-finals of ICC World Twenty20 (WT20) 2014 in Bangladesh under his leadership. With him calling the shots, Proteas defeated Australia and New Zealand on the road in the longer format as well.

Du Plessis replaced De Villiers who led South Africa in 103 ODIs, winning 59 of them. With a new head coach in Ottis Gibson, Faf will be inching to get his nation closer to their first major title in ICC World Cup 2019. 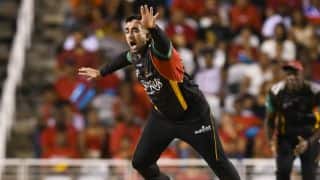