Du Plessis and Rossouw were involved in an unbeaten 99-run partnership for the third wicket.

Du Plessis brought his 16th half-century when he took a single off the bowling of Nasir Hossain. Du Plessis and Rossouw were involved in an unbeaten 99-run partnership for the third wicket. Du Plessis remained unbeaten on 63, hitting six fours. Rossouw was unbeaten on 45, hitting five fours and one sixes. LIVE CRICKET SCORECARD: Bangladesh vs South Africa 2015, 1st ODI at Dhaka

Quinton de Kock and Hashim Amla opened the batting for South Africa with Mustafizur Rahman opening the bowling for Bangladesh. It took three balls for De Kock to get off the mark, as he smashed a four. Nasir Hossain bowled the second over, as Mashrafe Mortaza opted to use spin to attack the South African batsmen from the other end. There was a chance of run out in the second over, however, Amla had reached the mark well in time. LIVE CRICKET STREAMING: Bangladesh vs South Africa 2015, 1st ODI at Dhaka

Mashrafe Mortaza got himself to bowl in the sixth over and removed Hashim Amla. Amla was caught by Mahmudullah at fine leg for 14 from 18 balls. Faf du Plessis was the next batsman to walk in.

De Kock went after the Bangladesh bowlers, as he started smashing boundaries. De Kock’s back-to-back fours guided South Africa past 50-run mark. However, he did not last long at the crease as he was caught by Sabbir Rahman off Nasir Hossain for 35 off 41 balls. He smashes five fours before he walked back. Rilee Rossouw was the next batsman to walk in.

There was a chance of run out, however, Mahmudullah, was unable to collect it and Rossouw survived. Thereafter, Du Plessis and Rossouw steadied South Africa’s innings en route to victory.

Earlier, riding on Kagiso Rabada’s six-wicket haul South Africa bowled out Bangladesh for 160. Rabada also became the second bowler in ODI history to take hat-trick on debut. Despite Shakib Al Hasan and Mushfiqur Rahim’s 53-run partnership for fifth wicket partnership, Bangladesh were not able to put on a big total. Shakib top-scored 48 runs for the home side facing 51 balls while Rahim added 24.

The start was delayed by rain as the match was curtailed to 40-over a side. 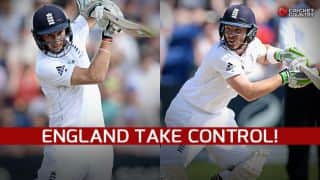