Steven Smith and Faf du Plessis agreed that they and the umpires had a responsibility to avoid the conflict that led to three players being fined after the first Test in Durban.

Captains Faf du Plessis and Steven Smith met on Thursday ahead of the second Test between South Africa and Australia in an effort to put the focus back on cricket following controversial incidents in the first Test in Durban.

They agreed that they and the umpires had a responsibility to avoid the conflict that led to three players being fined after the first Test in Durban.

“It was nice to have a chat and ensure that we’re playing within the spirit of the game and that cricket is what is written about and talked about after this game,” said Smith.

“It’s been all about the indiscretions in the last fixture and that s not what we want for the game. Cricket has got to be the winner.”

Speaking before the meeting, which happened between the pre-match press conferences by both captains, du Plessis said the captains needed to “make sure that things don t get to the stage that they got to in the previous game”.

Smith said the role of the umpires had been discussed. “If they hear something going on they (should) go to either Faf or myself and make sure we have our troops in line and playing within the guidelines.”

But both camps continued to disagree on what sparked the conflict in Durban.

Australian vice-captain David Warner, who was fined 75 percent of his match fee and given three demerit points following a clash with South Africa s Quinton de Kock as the players went to the dressing rooms at the tea interval, told Australian journalists that De Kock had made “disgusting” comments about Warner s wife.

Du Plessis, though, said de Kock had been provoked by personal comments made by Warner.

“I don t think we did a great deal wrong,” said Smith.

With Warner being one demerit point away from a ban, Smith said he would have to be aware of his situation.

“Davey plays really well when he s aggressive and he gets into the contest (but) he’s going to have to be careful to not cross the line.”

Du Plessis strongly defended de Kock. Asked why De Kock had challenged a level one charge, which resulted in a 25 per cent fine and one demerit point, while Warner had not contested his punishment, Du Plessis said it was about getting a point across to the officials.

“If you know Quinton s character you know he is a very, very quiet guy. I struggle to get a word out of him on the field,” said Du Plessis.

“So I know he s a very relaxed, laid back guy. So the point leading up to that (confrontation) would have been a lot of stuff said to Quinton, a lot of personal stuff.

“I thought he actually handled himself well in terms of all the stuff that was said to him. Eventually he reached a point where he said enough is enough. Any guy in the world would eventually say something back.”

Smith confirmed that Australia would field an unchanged side after winning the first Test by 118 runs. Du Plessis said that there was a discussion about whether Theunis de Bruyn or Temba Bavuma would fill the seventh batting position but said Bavuma was only 80 per cent recovered from a finger injury.

The pitch had a fair covering of grass a day out from the match but both captains expected it to be slow. “A typical Port Elizabeth pitch,” said du Plessis. 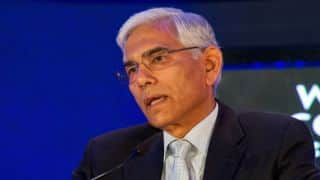