There have been many times throughout cricket's long and storied history where that spirit has been stretched to breaking point.

Cricket prides itself on being a bastion of fair play but the crisis engulfing Australia  is just the latest in a long series of scandals that show players have always pushed the boundaries to secure an edge. The preamble to the Laws of Cricket puts the spirit of the game front and centre, urging players to play hard but fair.

“Cricket owes much of its appeal and enjoyment to the fact that it should be played not only according to the Laws, but also within the Spirit of Cricket,” it says.

But there have been many times throughout the game’s long and storied history where that spirit has been stretched to breaking point. There is nothing new about ball-tampering, a cricketing “crime” that alters the condition of the ball, making it more difficult for a batsman to hit.

As far back as 1921 England  captain Johnny Douglas threatened to report Australia spin bowler Arthur Mailey for using resin to get a better grip on the ball. Mailey is reported to have hit back by saying Douglas had picked at the ball with his thumbnail.

And in 2006, Pakistan  forfeited a Test — the first time this had ever happened — against England at The Oval in London after being penalised five runs for allegedly tampering with the ball.

The current crisis surrounding the Australia team may be a blatant example of cheating, with Cameron Bancroft caught on camera rubbing the ball with yellow tape following a plan that Australia captain Steve Smith admitted had been discussed by the team’s “leadership group”.

Leading cricket historian David Frith told AFP he hopes the scandal will be a watershed.

“I hope this might be a cleansing moment,” he said. “I was brought up on the generation of cricketers who went through the Second World War, men like (Australia’s) Ray Lindwall and Keith Miller, (England’s) Alec Bedser.

“They didn’t go in for this verbal abuse of their opponents. They knew that cricket was a game, not a matter of life and death. If the current generation took that attitude, they’d misbehave a lot less and enjoy themselves a lot more.

“That’s why I hope New Zealand win everything going now, because they seem to have embraced that spirit.”

The sport has been shaken by the latest controversy, with the Marylebone Cricket Club, the guardian of the laws of the game, calling for a “major shift in attitude and culture” to preserve standards.

But despite its image, many of the sport’s greatest controversies have involved alleged offences against the “Spirit of Cricket”.

The “Bodyline” series of 1932-33, when England’s fast bowlers bowled at the body of batsmen in a bid to curb the phenomenal scoring rate of Australia great Donald Bradman, may have been unsporting but was not technically illegal under the rules as they then stood.

Fast-forward to 1981 when Trevor Chappell, the grandson of an Australia cricketer involved in the Bodyline series, rolled the last ball of a one-day international against New Zealand underarm along the ground to make certain the hosts won.

That too was allowed under the rules, since changed, but the “Underarm Incident” has been a blight upon Chappell’s life.

“I haven’t been able to shake off what happened to me in 37 years,” Chappell told the Sydney Daily Telegraph.

“What I did has lived with me ever since and it will be the same for Smith and Bancroft.”

As far back as the 18th century, gambling-inspired violence was commonplace at cricket matches and bookmakers were banned for a time from operating at Lord’s.

Late South African captain Hansie Cronje was banned for life after he admitted fixing his own team’s one-day internationals against India in 2000.

And in 2010 Pakistan fast bowlers Mohammad Asif and Mohammad Amir delivered deliberate no-balls during a Test match against England at Lord’s at the behest of then captain Salman Butt as part of a spot-fixing scam.

Shortly before the latest incident, the Australians had complained about the “abuse” they had received from sections of the crowd in Cape Town.

That was nothing, however, compared to the Sydney Riot of 1879, which was sparked when star Australian batsman Billy Murdoch was given out against England by an umpire employed by the tourists.

Yet cricket’s chequered history has not stopped many from within the game believing the sport is a moral force for good.

Lord Harris, the captain of the England team caught up in the Sydney Riot, wrote a letter to Britain’s Times newspaper on his 80th birthday in which he proclaimed cricket was “more free from anything sordid, anything dishonourable, than any game in the world”. 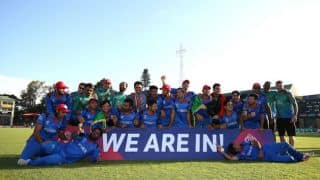