They have put up some very dominant performance so far against India but England skipper Alastair Cook has refused to label his team as "favourite" in the One-day series starting on Saturday. 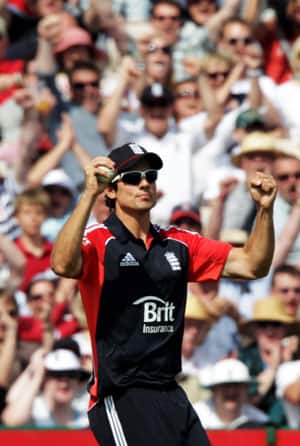 They have put up some very dominant performance so far against India but England skipper Alastair Cook has refused to label his team as “favourite” in the One-day series starting on Saturday.

Cook is cautious not to beat the drum of their apparent superiority against a weakened Indian side, which they trounced 4-0 in Tests before winning the one-off Twenty20.

“Whether we are favourites or not is irrelevant. It’s what happens on the pitch that’s what matters. If we can play well, we can put them under pressure,” Cook said ahead of the series-opener.

“We are here to win the series. India are world champions and a very good side. If we win the series, I will be very happy,” said Cook who is now in his second series as England’s one-day captain.

Cook, a left-handed batsman, said their main contention is to do well consistently in One-day format.

“The most glaring need is to be consistent. We want to beat the best sides day in and day out. That’s what we have been doing in Test cricket, not in ODIs and that’s area we want to improve,” remarked Cook.

Cook is happy that his side has an opportunity to improve as they would be facing 10 straight games against the world champions — equally divided at home and away.

“We will know a lot more about this side after these games. We beat the (World Cup) runners up Sri Lanka and now it’s the World Champions. We made some progress against Sri Lanka and now we need to do against a very good side (in India).”

England are without Kevin Pietersen in the one-day series and so Ian Bell, who came in at number six against Sri Lanka in the preceding series, would be batting up in the order.

The number six spot is thus up for grabs and it’s a toss up between Ravi Bopara and Ben Stokes. Cook indicated it could be Stokes padding up at his home ground at number six.

“You do need something special lower down the order. That X-factor. It’s no pressure on Ben but you need that ability to hit the ball off the park.”

The Essex player believed having three different captains in different formats helped generate fresh ideas and energy within the squads.

“We said it at that time. Everytime there is a new format, a new captain drives his ideas. There’s a fresh person talking all the time. That’s why we believe three-captaincy (theory) will work. It would help maintain the consistency in different formats.

“There are new, fresh faces, four or five players who weren’t part of Tests. There’s energy and desire to succeed.

You need that towards the end of a series. If you watched our practice session, you would have noticed the desire to improve.”

The England one-day captain declared that off-spinner Graeme Swann, world’s number one ODI bowler, could miss out since he is suffering from a bug.

“He doesn’t look particularly good. We will see how he pulls up tomorrow, we still have some time.”

The wicket in the centre is generally helpful to batters but Cook believed overcast conditions could help the ball to nip around.

“It’s a good one-day wicket from what I have seen playing for Essex and England. But when it’s overcast conditions, it will nip around a bit especially with the new ball.”

Cook said England was looking to have a settled side by the time the next world cup comes around in four years’ time.

“It’s a great chance as a side to do it. There are four years to World Cup and we want to have a very set and experienced side by then.” (PTI)

Dhoni seeking permission to set up sports academy in Bihar