Matthew Wade has made a successful return to Australia Test team with a century in the series opening Ashes Test at Edgbaston.

Matthew Wade has made a successful return to Australia Test team with a century in the series opening Ashes Test at Edgbaston. However, the reality of having scored an Ashes hundred is yet to dawn on him.

Wade fell out of favour in September 2017 before grinding it out in the Australia domestic circuit to present a strong case for a comeback. The weight of runs he scored while plotting his return saw him being included in Australia’s playing XI as a specialist batsman and not a wicketkeeper.

Wade scored 110 in the second innings, his first Test century since January 2013, as Australia recorded a big win against England to take a 1-0 lead in the five-match series.

“I feel like I’m a different player, I almost feel like I’m starting my Test career again, but an Ashes hundred, it probably hasn’t sunk in, it’s definitely the best moment I’ve ever had as a cricketer. It’s nice to put all that work in and then get a little bit of reward. It was fun,” Wade told ESPNcricinfo.

Providing a peek into his mindset, Wade revealed that he has not only worked on improving his batting but also changed his mindset which was the reason he was unable to enjoy his cricket earlier.

“When I was batting out there [at Edgbaston], I was looking at the crowd and I was just enjoying being in the moment. I don’t think I’ve ever done that at Test level. I’ve probably been chasing the next game, chasing the next score, feeling anxious and feeling the pressure. But I really enjoyed the other day, it was cool to be back out in the middle of a Test match with a big crowd. It’s a little bit different to playing first-class cricket when there’s not too many people around,” the 31-year-old said.

Wade made his Test debut in 2012 and was seen as the direct successor to the legendary Adam Gilchrist. However, the pressure of performing and the ‘fear’ of being dropped overwhelmed him.

“When you’re a younger player you’re chasing every game, you’re chasing every tour, selection’s always on your mind and you think that’s the be-all and end-all, to be honest,” he said. “You never want to be on the other side of being dropped – it’s a fear factor. I’ve been on that side and it’s not as bad as what you put in your mind. You get dropped, you go home, you go and play cricket, you make yourself better. I’m not scared of that anymore, and I’m really relaxed off field. So it’s been a cool two years to reinvent myself as a person and as a player.” 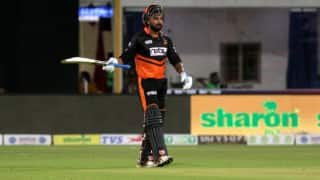