Marsh, playing his first Test in nine months, made a remarkable comeback to international cricket, claiming a five-wicket-haul at the Oval.

Mitchell Marsh is enjoying his successful return to international cricket during the fifth Test of the Ashes 2019. Marsh, playing his first Test in nine months, made a remarkable comeback to international cricket, claiming a five-wicket-haul at the Oval, and although his effort couldn’t prevent Australia from escaping a defeat, the allrounder is happy with his progress.

“It was awesome to be back playing,” Marsh was quoted as saying by cricket.com.au. “Obviously the last six months I lost my place in all three formats of the team, but I worked extremely hard to get back. Although I was running the drinks over there for the majority of the tour, I had the time of my life.

“I worked extremely hard on my game to make sure I was ready if I got an opportunity and I was able to take it with the ball, but unfortunately we lost. But I had an absolute ball over the last four months.”

Things took a turn for the worse for Marsh last December. Following a poor outing in the Border-Gavaskar Trophy which Australia lost, Marsh was dropped from the national team’s Test set-up and subsequently stripped as vice-captain. Marsh was further pulled down due to a groin injury because of which he missed Australia’s World Cup bus. But now, with a new regime, Marsh feels better than ever.

“I think my technique’s certainly tightened up as a batsman,” Marsh said. “I think now it’s just a case of turning my starts into big scores. Like (Australia coach) Justin Langer and (chairman of selectors) Trevor Hohns keep saying, we want guys bashing the door down. That’s the only way you get in the Australian team, it’s all about scoring big runs.

“I’ve obviously got myself a lot fitter over the last six months, to a point now where I feel really good with the ball in my hand and I can be a real threat with that. I’m certainly feeling good about my game at the moment.”

In addition to the motive of playing for Australia, Marsh revealed how head coach Justin Langer was influential in bringing the best out in him.

“For me personally, JL just said keep working hard. It’s pretty simple from him. He wants me to knock the door down with the bat for Western Australia and obviously take a few wickets,” Marsh said. “But it was certainly nice to have that confidence from him at the start of the Test match.” 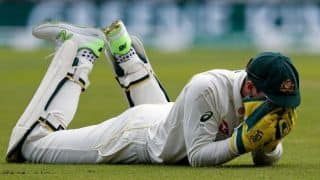 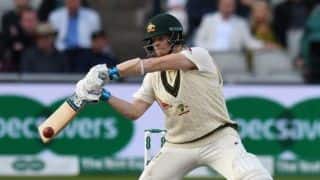