Bangladesh debutant Shadman Islam is happy to have realised the dream of representing his country in international cricket but feels he could have done better than scoring a half-century in his maiden Test innings.

Bangladesh debutant Shadman Islam is happy to have realised the dream of representing his country in international cricket but feels he could have done better than scoring a half-century in his maiden Test innings.

Bangladesh have struggled on the openers front. In the first Test of the ongoing series against West Indies, both their openers Soumya Sarkar and Imrul Kayes failed with the latter being ruled out of the ongoing second game on account of injuries.

The 23-year-old Shadman had scored 73 in a practice match against the West Indian and the team management took a punt on him as he opened the innings alongside Sarkar Dhaka on Friday.

He consumed 199 deliveres to score 76 runs with six fours, making an immediate impression. “Everyone has a dream to play for their country. I tried to give my best for the team, and although I couldn’t fulfill expectations, I will try to do it in the future,” Shadman was quoted as saying by ESPNcricinfo.

A well-set Shadman could have made his foray into Test cricket even more memorable had it not been for Windies spinner Devendra Bishoo who trapped him lbw, putting an end to his hopes of a century on debut.

However, he has no regrets. “There’s no real regret [of not reaching a century]. I think everyone wants a century on debut. I tried to bat the way it was best for the team. I couldn’t finish the day properly. I felt I should have been around for longer.”

He continued, “I didn’t think much more than trying to play to the merit of the ball, like the way I have played in domestic cricket. I think the practice match helped me. I got an idea about their bowlers. My plan for the practice match also worked here. [My senior team-mates] are more experienced than me, so they kept telling me that I should do only what I do best, like I bat in domestic cricket. They told me to not try anything extra. You have trusted your natural game, so stay that way.”

Shadman, who was part of Bangladesh’s squad for the 2014 ICC U-19 World Cup, has credited his father for playing a vital role in shaping his cricketing career.

“My father definitely has an influence in my life. When I was a kid, Abbu used to take me to all the U-15 and U-17 camps. I tried to prepare myself in academy and school cricket like my father guided me. He supported my cricket a lot. He still tells me how to play, how to set my life as a cricketer. I try to keep myself that way,” he said. 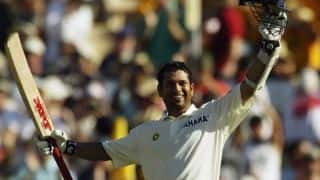