India sealed their place in the quarter-finals with a sloppy five-wicket win over Netherlands, following up an unconvincing fielding performance with a shaky chase. 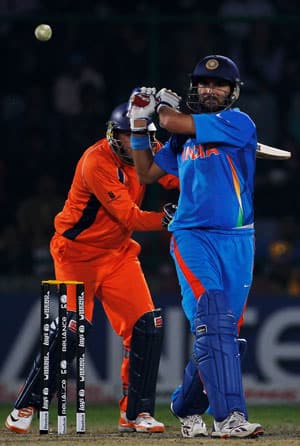 India sealed their place in the quarter-finals with a sloppy five-wicket win over Netherlands, following up an unconvincing fielding performance with a shaky chase.

India sealed their place in the quarter-finals with a sloppy five-wicket win over Netherlands, following up an unconvincing fielding performance with a shaky chase. They stumbled in pursuit of 189 but for the second game running Yuvraj Singh kept a cool head and steered India home with more than 13 overs to spare. Netherlands, after choosing to bat, only mustered 189, a total that briefly challenged India, but eventually proved to be inadequate.

India s chase began with Sachin Tendulkar and Virender Sehwag engaging in a brief but delectable game of see-ball-hit-ball. The pair matched each other stroke for stroke: Tendulkar s first five scoring shots were vintage boundaries, after which Sehwag thumped Mudassar Bukhari for three fours in an over. Just when it appeared the pair had put India on course for a drubbing, the left-arm spin of Peiter Seelaar put a dramatic skid on proceedings.

From 69 for no loss in the eighth over, India slumped to 82 for three. After a six and four to start the over, Sehwag was caught at point for 39 off 26 balls. In Seelar s next, Tendulkar waltzed out and lofted to long-off and Yusuf Pathan sent into bat at No 3 softly chipped a return catch. The Kotla was stunned. There were further bemused faces as India slipped to 99 for four when Peter Borren slipped one past an expansive drive from Virat Kohli.

Gautam Gambhir began nervously, surviving a run-out chance early, but settled down well and twice charged Seelar to collect lovely boundaries over the infield. Tom Cooper was also driven fluently by a twinkle-toed Gambhir, and it was thus anticlimactic when he was bowled off the thigh pad by Bukhari for a run-a-ball 28.

Yuvraj by this time had eased to 18 off 33, beginning with stoic defence but making the most of the loose deliveries that were served up to him. Borren suffered in one over first an overpitched delivery was creamed through the covers, and then a short and wide ball flew to the deep point boundary. This trend continued: much defending, but never letting a bad ball go. Seelaar and ten Doeschate found out the hard way as Yuvraj collected boundaries off wide deliveries in successive overs. Mahendra Singh Dhoni partnered Yuvraj for 52 runs, and in the end the target was not large enough to create serious problems.

Unlike India, Netherlands had no batsmen to steer their innings after a collapse. Their new opening act stubbornly had denied India a breakthrough for more than 15 overs, but once Piyush Chawla separated the pair the innings lost its way.

On a pitch with variable bounce, Eric Szwarczynski and Wesley Barresi came out with defiance on their minds and admirably staved off any threat from India s new-ball pair. Zaheer Khan struggled to find his rhythm and wasn t helped by an odd decision to move around the stumps, which negated any appeals for lbw. Bowling without a slip as early as the third over, Zaheer was largely ineffective and driven firmly for three boundaries by Szwarczynski.

The introduction of spin slowed the flow of runs but never was it threatening. Szwarczynski and Barresi batted well, ticking singles without trying anything rash. Their stand of 56 was snapped when Chawla snuck a googly through Szwarczynski. Yuvraj s introduction produced the second wicket as Barresi was rapped on the pads. It was Yuvraj s 100th ODI wicket, and he had reason to smile soon after when ten Doeschate chipped him down to long-off. Both ten Doeschate and Cooper had survived dropped catches and missed run-outs, so from India s perspective getting ten Doeschate for just 11 was massive.

From 99 for three, Netherlands slipped to 108 for six as Nehra and Zaheer returned and snapped up a wicket apiece, and Chawla picked up his second with a long hop. When that became 151 for 8, Borren opted for the batting Powerplay and carted Chawla for successive sixes in a 17-run final over. Bukhari joined the fun with a couple sixes in a handy partnership of 38, but that was as good as it got as Zaheer snuffed out the last two wickets in his seventh over.

Each of India s wins have come over weaker teams, and they have plenty to address ahead of meetings with South Africa and West Indies.