Shahid Afridi and Umar Akmal hit solid half-centuries to help Pakistan to a challenging 222 in the third day-night international against England at Dubai Stadium on Saturday. 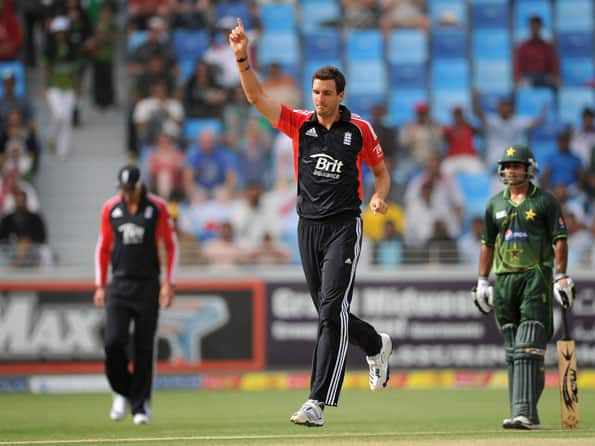 Shahid Afridi and Umar Akmal hit solid half-centuries to help Pakistan to a challenging 222 in the third day-night international against England at Dubai Stadium on Saturday.

Afridi hit a 55-ball 51 while Umar scored a 92-ball 50 during their 79-run sixth wicket stand which lifted Pakistan from a precarious 97-5 after Misbah-ul Haq won his first toss in the four-match series and chose to bat.

But Pakistan, trailing 2-0 after losing the first two matches in Abu Dhabi, initially failed to improve their fortunes as they lost Azhar Ali (five), Mohammad Hafeez (29) and Misbah (one) in the space of just two runs.

Two of these wickets went to paceman Stuart Broad, who finished with 3-42, while the impressive Steven Finn added one to his early breakthrough of Imran Farhat (nine) in this pacemen domination period.

Finn – who took four wickets apiece in the first two matches after sitting out the test series – finished with 3-24 off ten overs.

Afridi and Umar repaired the innings, with Afridi hitting three boundaries and a six.

Broad returned for his second spell to dismiss Umar, caught by Samit Patel after hitting just one boundary.

Afridi followed four runs later when he failed to connect properly with a big drive off paceman James Anderson who finished with 2-52.

Pakistan were forced to leave out experienced batsman Younis Khan who was suffering from a fever. Left-arm spinner Andul Rehman was also left out from Wednesday’s line-up and Asad Shafiq and Adnan Akmal were brought in.

Shafiq (18) also added 46 for the fifth wicket with Umar before he was run out. Umar Gul made 27 not out to give some late momentum to the innings. (AFP)