The tournament will mark Shaw's return to competitive cricket and the batsman cannot wait to give his all.

Having recovered from the ankle injury which ruled him out of the Border-Gavaskar Trophy last December, India batsman Prithvi Shaw is keen to gain some much-needed match practice with the Syed Mushtaq Ali Trophy starting February 21. Shaw, 19, was included in Mumbai’s 15-member squad for the India’s domestic T20 tournament, alongside the likes of Shreyas Iyer, Siddhesh Lad, Suryakumar Yadav and former captain Aditya Tare.

The tournament will mark Shaw’s return to competitive cricket after he twisted his ankle during a practice match in Australia, and the batsman cannot wait to give his 100 percent. The Mumbai batsman scored a sparkling century on his Test debut against the West Indies in October, but he then missed India s first Test series win in Australia after injuring himself in a warm-up match.

“I am really looking forward to taking the field again and performing at my best. I have missed playing competitive cricket due to my injury and I’m ready now to give my best for Mumbai and India,” Shaw told Times Of India.

Shaw’s injury took place on Day 1 of India’s practice match against Cricket Australia XI in November last year. He injured himself while attempting a catch at the deep midwicket boundary at the Sydney Cricket Ground and was carried off the field while visibly in pain. The Indian team management sent him to a local hospital for scans, after which Shaw was eventually ruled out of the series.

Although there were indications that Shaw would be fit to play in the latter half of the series, the 19-year-old failed to regain full fitness and was sent home from Australia. Shaw, often compared to the legendary Sachin Tendulkar, has been batting in the nets at the National Cricket Academy in Bangalore ahead of the tournament and expressed disappointment over the fact that he could not play in the high-profile India-Australia series, which the visitors won 2-1.

“I thought I would recover, but the swelling would keep coming back,” Shaw said. “Initially, I was very sad to miss the Tests in Australia, because I wanted to win games for India. I would have gained good experience playing against a quality attack, but I can’t do anything about it. However, I felt better when we beat Australia in the Test series.” 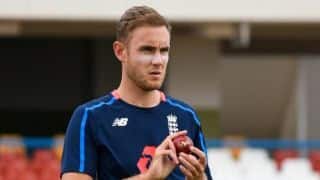