The winning margin of just four runs was also the fifth narrowest in the history of Test cricket which stretches back 2,327 matches to 1877.

New Zealand‘s dramatic win over Pakistan in the first Test in Abu Dhabi on Monday was one of the most unpredictable and exciting in living memory as the fortunes of the two sides appeared to swing with every session. The win, orchestrated by the debutant left-arm spinner Ajaz Patel has put Kane Williamson s New Zealand up 1-0 in the three-match series, with Friday s scoreline in the first Test in Abu Dhabi being the narrowest for the touring team ever.

The winning margin of just four runs was also the fifth narrowest in the history of Test cricket which stretches back 2,327 matches to 1877.

Here are the top five tightest finishes in terms of runs:

The West Indies headed into the fourth Test in Adelaide trailing 1-0 in the five-match series. In a relatively low-scoring game, Australia needed just 186 to win but were reeling at 144-9. Last pair Tim May and Craig McDermott set about the impossible but Courtney Walsh had McDermott caught with just two runs needed to win. West Indies went on to win the fifth Test to claim the series.

England made all the running in the second Ashes Test but Shane Warne came within a whisker of snatching it for Australia. The leg-spinner had already taken 10 wickets in the match and all seemed lost when he came to the crease with Australia 137-7, needing 282 to win. He made 42 and then watched as Brett Lee and Michael Kasprowicz added 59 for the last wicket. At the end, Australia fell just short when Kasprowicz feathered a Steve Harmison bouncer to Geraint Jones behind the stumps. England went on to win the Ashes for the first time since 1986-87.

England went into the Boxing Day Test trailing 2-0, knowing another defeat would see Australia win the Ashes. Fortunes swung over the first three days and left Australia needing 292 to win. At 218-9, it looked to be over but Alan Border found a willing partner in Jeff Thompson and together they scratched off the runs. But Ian Botham took the new ball and found the edge of Thompson’s bat. Chris Tavare at slip spilled the chance but Geoff Miller clung on to the rebound to keep England in the series.

This was to become Fred Tate’s match for all the wrong reasons. The Sussex bowler was playing his first Test and had the misfortune to drop a straightforward catch off Aussie batsman Joe Darling when he only had 17. Darling went on to make 51. England needed 124 to win but last man Tate came out to join Wilfred Rhodes with eight still needed. Tate edged a four but then had his stumps re-arranged by Jack Saunders. It was enough for Australia to win the Ashes. Tate never played for England again.

New Zealand struggled from the start as they were bundled out for just 153 but their bowlers made sure Pakistan would only take a first innings lead of 74. BJ Watling and Henry Nicholls gave the Black Caps some hope but 176 looked simple enough for the Pakistani batsmen. From 130-3, however, they collapsed to 171 all out with debutant spinner Ajaz Patel claiming the final wicket to finish with figures of 5-59. 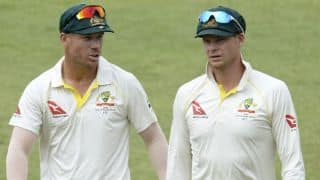