India coach Duncan Fletcher believes the famed Indian batting came a cropper in this series because the wickets so far in the series have afforded uncommon assistance to seam and swing. 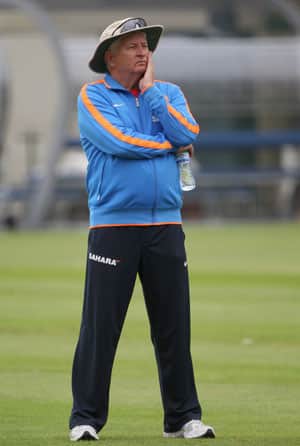 India coach Duncan Fletcher believes the famed Indian batting came a cropper in this series because the wickets so far in the series have afforded uncommon assistance to seam and swing.

“I haven’t seen so often when the ball has seamed and swung around the whole day. Only today, after the first session it swung less and less and did flatten out. It’s pretty difficult for batters to adapt,” said Fletcher after Indians, put into bat, were all out for 224 on the opening day of the Edgbaston Test.

India have so far batted five times in the series and not once posted a score of 300 or in excess and Fletcher conceded that it made things difficult for his bowlers.

“The ball has swung around so much in a row, it’s pretty difficult for batters to adapt. We haven’t been able to give scores to the bowlers,” he said.

India had lost opener Virender Sehwag for a golden duck but Gautam Gambhir and Rahul Dravid stitched together a fine stand of 51 runs for the second wicket before both were dismissed and Fletcher feels those two wickets in the first session made all the difference.

“Toss was very important. We were looking alright before lunch when we suddenly lost two quick wickets. It got us on to the backfoot. If we were one wicket down at lunch, it would have been a different story,” he said.

“It got easier. First session before lunch was critical. It didn’t swing as much later in the day.”

As conditions eased, England made the most of it reaching 84 for no loss at stumps.

“In these situations when you score 224, you got to get early wickets on. You try to attack and when you attack there are bound to be some lose balls. It was critical we get a wicket or two by close,” he said.

Fletcher praised the England bowlers and said the seaming conditions helped the hosts.

“They have bowled well as a unit and have a good backup. They are an effective unit. They hunt in pack well, there is a lot of intensity about them. It’s been made easier for them by the conditions; the seam and swing suits them well. I have been for only two months in India still assessing the characters of the individual, trying to assess young guys if they can handle Test cricket.”

Fletcher conceded that his team could be tired but said they still are motivated to do well in Tests.

“Sometimes you feel (they are tired). But they still put in some good performance in practice. Even when you give them option to practice, they still turn up. They are still keyed up and want to do well in Test cricket,” he said.

Fletcher said his side is not yet out of the game and one big score can turn things for them.

Bresnan wants to give something positive to riot-hit England