England coach Andy Flower is "very excited" by what he is seeing from Kevin Pietersen despite the gifted batsman's latest failure against left-arm spin. 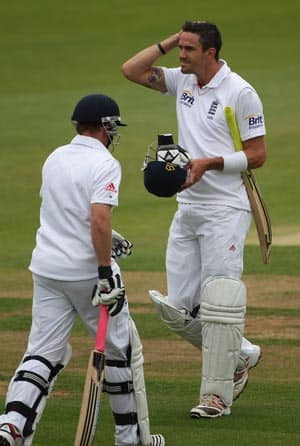 England coach Andy Flower is “very excited” by what he is seeing from Kevin Pietersen despite the gifted batsman’s latest failure against left-arm spin.

Flower’s men wrapped up an extraordinary innings and 14-run in the first Test in Cardiff after skittling out Sri Lanka for just 82 in the tourists’ second innings in under two extraordinary hours at Sophia Gardens on Monday.

Almost as notable was that an England total of 496 for five declared should feature a mere three runs from Pietersen, the only one of the hosts’ frontline batsmen to be out in single figures.

Pietersen’s exit, lbw to Rangana Herath, was the 19th time in Tests the South Africa-born batsman had fallen to a left-arm spinner

“It is obvious he has had his issues,” said Flower of Pietersen, whose stellar start to his Test career means that, even though he scored an Ashes double hundred in Adelaide six innings ago, he has found himself being judged by the very highest standards.

However, the England coach — himself a world-class batsman while representing Zimbabwe — was confident it was just a matter of time before Pietersen was in the runs again.

“I will be perfectly honest with you, I am very excited by what I see from KP at the moment,” he said.

As for Pietersen’s difficulties with the likes of Herath, Flower said: “He’s had his obvious battles playing left-arm spin but he is aware of them and is working hard at them.

“When he was out in Bangladesh he scored a very, very fine Test century (Pietersen actually made 99) against at least two left-arm spinners.

“He worked hard in the nets there on his method against left-arm spin and he played them very comfortably. Since then he has had a few ups and downs, but I don’t envisage this problem continuing,” Flower added ahead of the second Test of three against Sri Lanka starting at Lord’s on Friday.

As for suggestions Pietersen might want to ‘save’ a big score for the visit of India, the world’s top-ranked Test team, later in the English season, Flower said: “There is no time for keeping runs back. Lord’s will do nicely!”

Meanwhile Flower was still coming to terms with England’s astounding win in Cardiff where it seemed rain, which washed out play before lunch on Monday’s last day, would condemn the contest to a draw.

“We thought there was just a three or four percent chance of us winning if we took a few early wickets with the new ball,” Flower said after fast bowler Chris Tremlett led the attack with four wickets in the absence of the injured James Anderson.

“But it was definitely the way to go, rather than let the game peter out to a boring draw,” he insisted.

“Usually when we are talking in those terms it is when we have our backs to the wall. Here we were slightly ahead and only had a very slim chance of getting in a position for a victory. But our guys still believed they could, and then they were good enough to deliver.”

England called up uncapped Surrey seamer Jade Dernbach into their squad as cover for Anderson on Tuesday.

But given they have retained Steven Finn, in the squad at Cardiff but not selected for the final XI, it looks as if the Middlesex fast bowler will make a return to Test cricket on his Lord’s home ground later this week.

Warne made me toughen up: Tremlett