Ahead of the upcoming T20I series against Bangladesh, Pakistan skipper Babar Azam said that the side is confident to retain its world No.1 ranking in the shortest format of the game.

Ahead of the upcoming T20I series against Bangladesh, Pakistan T20I skipper Babar Azam said that the side is confident to retain its world No.1 ranking in the shortest format of the game.

“We are focused on continuing our world No. 1 ranking and that can happen only if we ultimately win the series,” ESPNcricinfo quoted Azam as saying.

Pakistan is ranked one in T20Is followed by Australia, who are just one point away to dislodge them.

The Green Army have to whitewash Bangladesh Team in the three-match T20I series if they to sustain their position as No. 1 side.

The 25-year-old said that the upcoming series is a must-win for us if the team need to remain on top.

“When you think that you have to retain your position and it comes to a do-or-die match then we have to plan accordingly. Our aim is to win the series. No team can be taken lightly nowadays, but we are positive and will try to play good cricket,” he said.

Earlier, Shoaib Malik and Mohammad Hafeez have returned to the Pakistan side for the T20I series against Bangladesh.

Malik played his last T20 game against Pakistan in February 2019 while Hafeez is returning to the side after a break of 14 months.

On the presence of Malik and Hafeez in the side, Azam said that the experience of senior players will him in the series.

“As a captain, it will be a great help with seniors around me and I get to learn a lot,” he said.

He said that the team have practiced and prepared well for the series and the side will look to win the series.

“Overall we have made very good preparations – we played four [practice] matches and the team has gelled and we hope we will give you good results,” he added.

The first T20I of the three-match series will be played at Gadaffi Stadium in Lahore on January 24. 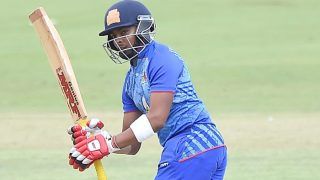