Ishant, Bumrah and Shami are likely to be India's three pacers for the Wellington Test. New Zealand’s Ross Taylor is aware of the threat India can pose in the Test series and hence, the veteran batsman is not only focussing on individuals but their whole squad composition. The fact that India possess one of the best batting line-ups in the world and that they are at the pinnacle of Test rankings will ensure New Zealand read nothing into the ODI whitewash when the first Test begins in Wellington on Friday.

“They have got a world-class batting line-up as well and we have to get through that. But they are the No. 1 team in the world for a reason and we know we have to be on our game to be successful against them,” Taylor told media on Wednesday.

The return of India’s premier fast bowler Ishant Sharma has bolstered what was already a formidable pace attack with the likes of Jasprit Bumrah, Mohammed Shami, Umesh Yadav and Navdeep Saini. Ishant recovered from an ankle injury sustained during a Ranji Trophy match and was flown to New Zealand to join the India squad. Virat Kohli already hinted the inclusion of Ishant in the Playing XI, which will likely result in India going in with three pacers with Bumrah and Shami being the other two.

“I think if we just look at Bumrah, we are in trouble. I think their whole bowling line-up is fantastic. Obviously, Sharma coming back will bring new dynamics to the team,” Taylor added.

As for individual achievements, Taylor stands on the verge of a unique landmark. He is one Test away from becoming the first New Zealand cricketer to feature in 100 games in each format. The batsman admits to have never thought about being where he is at the moment, especially after a lacklustre start to his Test career. But today, nearly 14 years after his international debut, Taylor has established himself as one of New Zealand’s all-time greats.

“Yeah, I think so. That [setbacks] shapes you as a person and as a player,” Taylor said. “Sometimes it’s not necessarily the runs you get and the good times. It’s how you deal with failures along the way that shape you as a person, as the way you go about your training, as a teammate. Sometimes it’s the negative things that make you stronger and more resilient, and that’s what you need to be a Test player, said Taylor.

Had it not been for the terrorist attack at a mosque in New Zealand, which resulted in the cancellation of a Test match at Christchurch against Bangladesh in 2019, the third Test against Australia in Sydney would have been Taylor’s 100th. The 35-year-old batsman is glad to have gotten the opportunity to play his landmark game in front of friends and family.

“David White (NZC CEO) comes in and gives us a talk about what games are coming up and you start doing the math and he actually says Ross, it’s going to be your 100th Test in Sydney. But obviously what happened in Christchurch last year with the shootings at the mosque had moved things back a game,” he said. “But then, things happen for a reason, I believe, and it’s nice for it to happen back home. I don’t know how many people would have travelled to Sydney for it. So it’s nice for it to be here.”

Two of New Zealand’s all-time greats, who know what it’s like to play 100 Tests have already congratulated Taylor on what lies ahead Friday, and the list is expected to grow once he’s there.

“I just got a call from Brendon before we got here saying all the best. He said I’do better than what I did’, I don’t know what he got in his 100th game. I asked if there was any tip on how to deal with tickets and things like that,” he laughed. “I got a message from Vettori as well last night. Obviously, it is a special club to join and it’s nice to hear from fellow players who have been there and done that.” 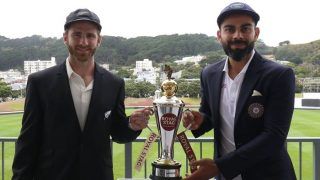