Controversy erupted during the third day of the first Test between South Africa and Pakistan in Centurion when the third umpire overturned an on-field decision in the home team's favour.

Controversy erupted during the third day of the first Test between South Africa and Pakistan in Centurion when the third umpire overturned an on-field decision in the home team’s favour.

In a chase of 149, South Africa had lost opener Aiden Markram without scoring any run and the first run came as late as the sixth over. Then Fakhar Zaman dropped a catch from Hashim Amla and then came a pivotal moment that needed the intervention of TV umpire.

Dean Elgar, batting on four, had edged one from Shaheen Afridi to the first slip where Azhar Ali claimed a low diving catch. The soft signal from the on-field umpire was out but after watching several replays, the TV umpire Joel Wilson deemed it as not out. The decision left Pakistan players surprised with coach Mickey Arthur entered TV umpire’s room questioning the call.

Both Amla and Elgar scored half-centuries. South Africa went on to win the Test but not before losing four wickets on a pitch described by Pakistan captain Sarfraz Ahmed as a ‘bowler’s paradise’.

Sarfraz felt the catch was clear. “For me, he [Azhar Ali] took a clear catch,” he was quoted as saying by Cricbuzz on Friday.

The controversy notwithstanding, Pakistan have their own issues to address, especially the batting collapse they are encountering when batting in the second innings. The malice dates back to the Hamilton Test against New Zealand when they capitulated from 159/1 to 230-all out.

Sarfraz acknowledged it saying it has to do with mental pressure. “We take a lot of mental pressure because of which we are unable to perform in the fourth or second innings…We are struggling in the second innings [for the past two years]. We do get starts but then a wicket falls which initiates a collapse. It has been a while now,” he said. “Since Hamilton (Test) this is happening. We will have to sort this out going forward. The responsibility lies on everyone, the players and the coaching staff.”

He also backed the under-fire middle-order pair of Azhar Ali and Asad Shafiq to bounce back after failing in the first Test. “Both batsmen realise that they shouldn’t have gotten out the way they did,” he said. “Azhar Ali and Asad Shafiq have been working hard and we expect them to bounce back in the next match. I think we had an opportunity yesterday. Had we played for another hour, we could have scored more. We lost too many wickets after tea because of which we lost the match.” 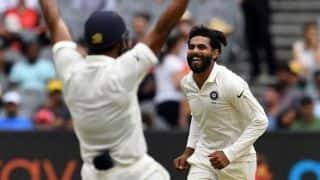