There was a time when the country would field an A squad alongside its main team for an annual limited overs triangular series in the Australian summer.

Australia coach Justin Langer is looking at the COVID-19 pandemic as “an amazing opportunity” to fix the issues that have seeped into the country’s once thriving state and club level setups. There was a time when the country would field an A squad alongside its main team for an annual limited overs triangular series in the Australian summer.

“It wasn’t that long ago that we prided ourselves on having an amazing club cricket system that fed into state domestic cricket, which fed into the best of the best playing for Australia,” Langer told ABC Grandstand on Fox Sports. “I see it (the current situation) as an amazing opportunity. I can see it (domestic cricket setup) actually going back that way.

“More emphasis back on club cricket, more emphasis on state cricket then get the best of the best in Australia. That would be my vision for the next five years.”

Under normal circumstances, the Australian players would have assembled in Brisbane before flying to Bangladesh for a two-match Test series. But like all other sporting engagements, the pandemic has also led to the postponement of that tour.

Under Langer’s guidance, Australia recently grabbed the number one position in Tests at the expense of India. Langer has been regularly offering feedback during Cricket Australia chief executive Kevin Roberts’ discussions with staff, while also staying in touch with players and helping them with his advice amid this pandemic.

“We’ve got to make sure they’re all in tip-top condition. I actually can’t wait to see how they come back without all the bells and whistles… it’s going to be a really good indication of the hungry, self-resilient and self-reliant players,” the coach said. “We’ve got to keep moving the ship in the right direction… our guys come back off their leave on May 18.” 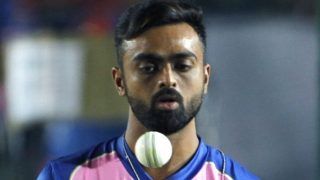 Yuzvendra Chahal Calls MS Dhoni a 'Legend', Admits Missing Him Behind The Stumps