Stunned by India's Test slump abroad after the 0-4 rout in the series against Australia, former stalwarts blamed it on the star-studded batting line-up's flopshow, saying heads have to roll following a second successive whitewash overseas. 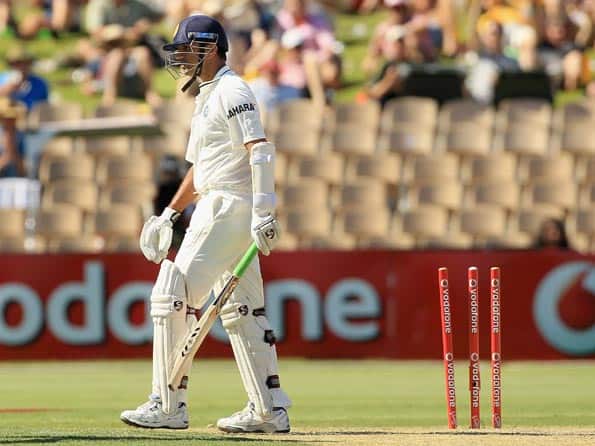 Stunned by India’s Test slump abroad after the 0-4 rout in the series against Australia, former stalwarts blamed it on the star-studded batting line-up’s flopshow, saying heads have to roll following a second successive whitewash overseas.

India were humbled by 298 runs in the fourth and final Test, losing their eighth consecutive match on foreign soil.

“Our batting failed miserably. (Australia captain) Michael Clarke and (Ricky) Ponting batted beautifully and rallied them from situations when they were three wickets down,” added another former captain and ex-chief selector Dilip Vengsarkar while reacting to the debacle.

“The fielding was poor, especially close-in catching, and the overall performance of the Indian team was extremely poor,” he said.

Ajit Wadekar, also a former captain, suggested that senior players should return to the domestic circuit and wondered why a promising batsman like Rohit Sharma was left on the bench.

“Seniors should play domestic cricket. It was really terrible. We had world-class batsmen around but it was really sad to see that we could not deliver as we should have been,” said Wadekar.

“In our days, we used to play against our idols like Polly Umrigar at domestic level. That’s how we learnt our cricket. But these days seniors like Sachin Tendulkar, Rahul Dravid and Virender Sehwag don’t play at domestic level and hence no scope for the youngsters”, he said.

“I think we relied too much on the seniors. We have seen that Virender Sehwag was completely out of form so was Gautam Gambhir. Even Rahul Dravid and VVS Laxman struggled in the conditions”, Wadekar said.

“Virat Kohli did well in the series but it was really astonishing to see that the likes of Ajinkya Rahane and Rohit Sharma were not given any chance. Time has come for some bold and brave decisions,” he added.

Wadekar also felt that India are not taking Test cricket too seriously.

“Our preparation for the tour was not up to the mark. Countries like England, Australia and South Africa take Test cricket as their number one priority. We saw that in England and now in Australia.

“They were all prepared and had their plans against each of our batsmen. We on the other hand were clueless. The players should have played more cricket before setting off on the tour,” he explained.

But Wadekar also felt that the players are overworked.

“There is too much of cricket in the middle and we are forgetting to plan in a better way. It’s the job of our Board to look into this aspect and plan the cricket in a way that the seniors and the youngsters get benefited.

Former middle-order stalwart Chandu Borde was also forthcoming by saying it was an abject failure of the strong batting unit.

“It has been a disappointing performance. I think the batting commitment was not there. The batsmen kept on committing same mistakes again and again without learning from them. The Australians had studied our batsmen’s strengths and weaknesses and planned well,” said septuagenarian Borde.

Vengsarkar slammed the selection committee for not having “vision” and the poor itinerary that left a talented batsman like Rohit without any match practice for over five weeks.

“The itinerary was faulty. Rohit Sharma has not played any cricket for five weeks. The selectors have also not shown any vision or courage of conviction,” fumed the 55-year-old Vengsarkar who represented India in 116 Tests.

The ex-stalwart also attacked the BCCI for sweeping suggestions given by former cricketers under the carpet after having called for a meeting with them in the past.

“After such defeats the BCCI arranges a meeting with former cricketers, asking their suggestions and then sweeps them under the carpet.”

Former wicketkeeper Syed Kirmani said new coach Duncan Fletcher should also be held accountable for the debacle which was primarily a result of poor commitment and application.

“It’s the worst performance by our team in the entire cricket history. It’s really unfortunate that such was our performance with such experienced line-up. The very start of the series in Melbourne on Boxing Day was devastating.

“Then the side was under tremendous pressure and could not catch up with the Australians. There was lack of application, effort, attitude from the players which was evident from their body language,” he said.

“Our players have to go. I can understand a bad phase but for not so long. A world class player is one who bounces back after two or three failures. I am not taking any names. It’s all there for everybody to see. The captain alone should not be blamed if the team does not perform.

“The coach should be held responsible. Nobody is asking what is the coach doing amid all the ruins of a 0-8 loss overseas. Is he giving the right guidance to the players? Or is it that the players are not listening to him?” he asked.

Former spinner Venkatpathy Raju said there was need for better organisation and planning.

“India are playing more cricket than any other country. Everybody wants to play against India. There is non-stop cricket and little planning has been put into it. It’s not just about International cricket, we have to plan our domestic cricket also.

“As far as the debacle in England and Australia was concerned, Indians were not prepared well for the tours. Seniors were not playing the one-day format and don’t even figure in the domestic circuit and they straightaway go to play overseas,” Raju said.

“If the seniors play at domestic cricket, not only they themselves will get some match practice but the youngsters will benefit immensely,” he added.

Another former player Saba Karim said this is the “worst phase” of Indian cricket.

“I don’t think we have ever done so badly overseas. Time has come for the BCCI and the selectors to take dramatic and corrective measures. The only solution I see at this moment is to bring in some changes and rebuild the side. Every strong team goes through debacle.

“We have to look at the 2007 World Cup debacle and how the selectors took a brave decision to bring in youngsters and built the side around Dhoni and won the 2011 World Cup. That should be a lesson for us,” he added.

He also called for the axing of Laxman and Dravid if they don’t retire.

“Our batting is the main concern and I don’t see a place for VVS and Dravid in this present side anymore. There is also time to make changes in the opening slot which has not clicked for so long”, he said.

“We must realise that the golden era is now over. As far as captaincy is concerned I think Dhoni should be given a bit more time. He has unable to take strong decision and the reason is that he has not contributed much as a player. He needs to realise he is in the team as a player first and then as a captain,” Karim said.

Former all-rounder Bapu Nadkarni also expressed his deep disappointment at the pathetic Indian display and put the blame squarely on the batsmen for the disastrous outing.

“When the team left (for Australia) I thought they would do well. But it’s completely baffling how they performed so miserably. It was a complete batting failure.”

“There are no excuses. We can’t blame the wickets too as they were not as fast or as bad as were made out to be before the matches,” said Nadkarni, also a septuagenarian.

Former wicketkeeper and chairman of the selection committee Kiran More said the selectors should now wake up as the “bomb has exploded”.

“Wake up selectors, stop dreaming. This was a disaster waiting to happen. The bomb has exploded now and now everybody is becoming panicky”, he said.

“The thought process should have started after the England whitewash. But our selectors kept on dreaming. They were all sleeping. It’s a wake-up call now. We did not groom our youngsters well. At least Rohit Sharma and Virat Kohli should have played good amount of Tests before this tour. But they kept on dreaming. It was long due”, More said.

“Our chief selector Krishnamachari Srikkanth has come out with a statement saying it was shocking and disappointing which was really in a poor taste. I have high regards for the seniors but the top five batsmen have failed in the series. Our selectors however did not create a place for the youngsters in the XI. Ajinkya Rahane and Rohit Sharma will return home without playing a Test”, he said.

England close in on Test win against Pakistan