Even during his playing years, Sanjay Manjrekar often regaled his team members with flawless renditions of Rabindra Sangeet.

“I don’t know Bengali. I have learnt these songs by listening to cassettes and CDs of Kishore Kumar, who is my favourite singer,” told Manjrekar. The right-hand batsman, who played 37 Test matches and 74 One-Day Internationals (ODIs) for India between 1987 and 1996, said he fell in love with Rabindra Sangeet and listened to these songs again and again.

“I worship Kishore Kumar and his songs which got me introduced to the beautiful Bengali songs that he has sung over the years. heard Kishore Kumar’s rendition of Rabindra Sangeet and fell in love with it. Listening to and singing Rabindra Sangeet puts me into a state of bliss, away from the maddening world into a state of calm and harmony. I hope I have been able to do justice to the songs and expect the listeners to appreciate them,” said Manjrekar.

Even during his playing years, Manjrekar often regaled his team members with flawless renditions of Rabindra Sangeet. Later, as a commentator also, he would often come up to the media box to entertain Bengali scribes with Tagore songs. 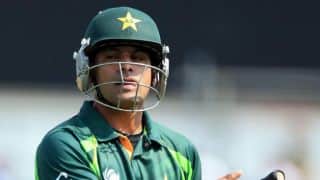 Pakistan selectors give Mohammad Hafeez chance to prove his fitness